Derry City knock Shamrock Rovers out of the Cup AET 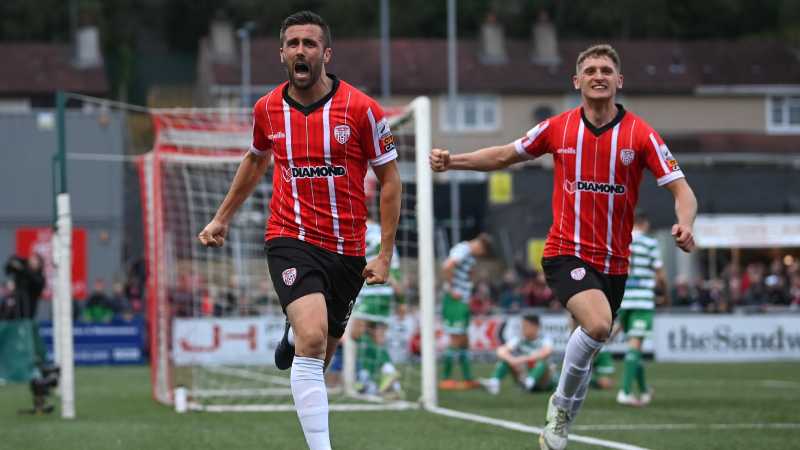 Derry City advanced to the FAI Cup semi-finals after a thrilling, feisty 3-1 win over ten-man Shamrock Rovers, that was dramatically decided in extra time

It is almost an understatement to call this match a classic cup tie but ultimately that is exactly what it was, packed with incident, a thrilling Brandywell atmosphere and drama aplenty.

The first big moment came in the twentieth minute as Jamie McGonigle picked the ideal time to end his 15-game goal drought! Cameron McJannet’s brilliant cross was calmly headed back across goal by Mark Connolly and McGonigle instinctively headed home.

Cameron Dummigan thundered a shot off the crossbar before Rovers were reduced to ten men.

Shamrock defender, Lee Grace was shown a straight red card by referee Rob Hennessy after shoving Derry’s captain, Patrick McEleney to the floor. A definite penalty but harsh sending off.

Will Patching stepped up, but it was déjà vu as he lashed against the crossbar, having also missed a penalty against Shamrock in the league.

Derry were dominant yet with the score only 1-0, they were always vulnerable.

Shamrock punished their profligacy midway through the second half. Neil Farrugia sliced the backline open, Andy Lyons shot and despite Brian Maher saving, the tireless Rory Gaffney gleefully gobbled up the loose ball.

Youngster Brandon Kavanagh, also on as a sub, added gloss to the score when he weaved through a shattered Shamrock defence and slotted home his first goal for the Candystripes!

An enthralling encounter, will it have psychological ramifications on the fight for the league title between these two? The coming games should tell.