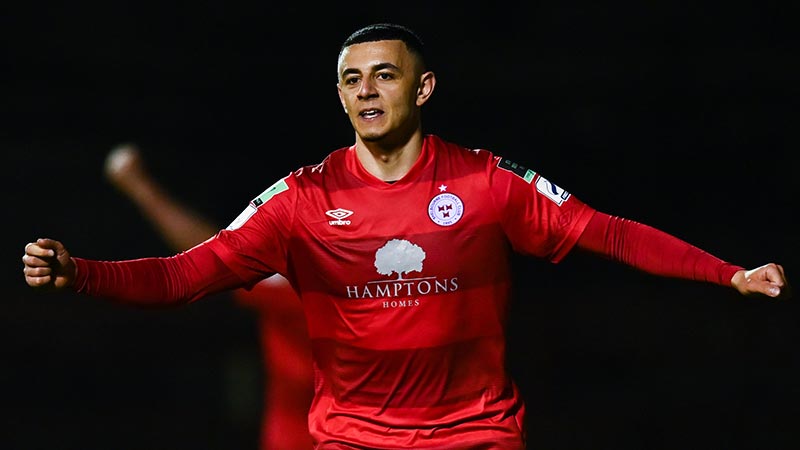 10-man Cork City fell to Shelbourne at Turners Cross, in a game in which the visitors dominated after an early setback. Goals from Ally Gilchrist, Shane Farrell and Yousef Mahdy, cancelled out Dylan McGlade’s first-half penalty.

City got off to a good start in a match in which they were looking to move on from two defeats in a row. It looked like this might happen in the opening stages, as Shelbourne’s Maxim Kouogun gave away a soft penalty.

Dylan McGlade made no mistake from the spot, but from then on it was all Shelbourne.

A bullet header from Ally Gilchrist, from an accurate George Poynton corner, drew the scores level, as Shelbourne turned up the pressure. Then a controversial red card for Jack Walsh after a coming together with Farrell made Shels job a lot easier.

It was one way traffic from then on. After half time, Farrell took Shels into the lead, as the ball broke to him on the right side of the box and he stroked the ball past Mark McNulty. Any chances of dogged Cork resistance were shattered in seconds.

Quality was few and far between as the seconds ticked on, and sloppy passes were played by either side. There were chances to make it three for Shels, as Michael O’Connor’s header went a whisker wide of the goal, and substitute Yousef Mahdy’s headed effort was impressively tipped over the bar by McNulty in the Cork net.

It was a sprinkling of trickery from Mahdy that would put the game out of the Rebels reach. As he made his way past Cork skipper Gearoid Morrissey, he was brought down and referee Marc Lynch pointed to the spot. The late penalty secured the three points. Cork hardly managed to escape from their own half after the break, as they were powerless against a thoroughly professional Shelbourne side.

The hosts have now lost three games on the trot, as the Rebels have struggled to bounce back from relegation. Shelbourne look like they could do just that though, as they showed a real killer instinct to maintain their unbeaten record.