Fantastic five from Peas in Cork 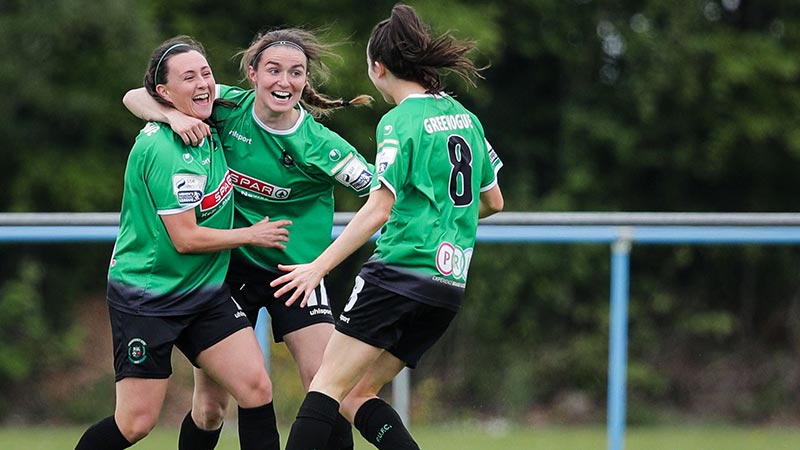 A repeat of last year’s FAI cup final, the result was even similar in that the reigning champions marched to three points, although in a less extravagant manner than last December’s 6-0 at Tallaght Stadium.

The victory means James O’Callaghan’s troops are once again level with old foes Shelbourne at the top of the table, replica in both points earned and goal difference.

While there was some discrepancy in whether Beirne’s opener was intended as a cross or an effort at goal, what there is no debate about is that it was a cracking strike.

Seven ticks later Roche sailed onto the scoresheet in the 10th minute with another rocket to seal the two goal cushion for the away side, and it remained that way heading into the interval.

It took until half an hour into the second half to see another mark for The Dublin outfit as Cork enjoyed their purple patch and had half chances at their fingertips via Laura Shine and the ever present Sarah McKevitt, but it was Sadhbh Doyle who netted past Abby McCarthy in the 76th minute.

Roche and Doyle tied up their double brace just minutes before the final whistle to see United soar back to the summit of the Women’s National League in series 16.

Next week fixtures take place both on midweek and on Saturday as a two week break approaches and so the amalgamation of points is as crucial now as ever.

Cork City will take learnings from this heavy loss against a high flying team into their clash against a more adjacent in the table Treaty United, while Peamount look to accumulate another three points versus DLR Waves.

Even in this fixture against the Turner’s Cross line-up what has become extremely evident is that goals are as imperative as results these days to the Aine O’Gorman captained side and so going into the future they will have to duplicate such a score-line to maintain their first placed position in the league.