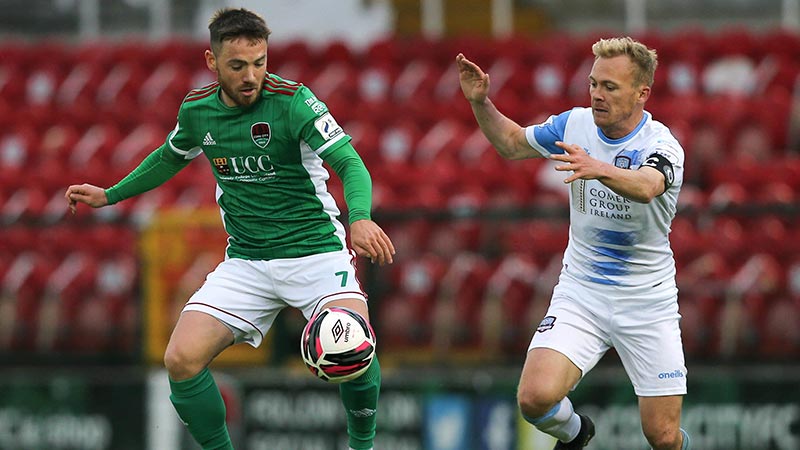 Cork City and Galway United played out an entertaining but fractious draw at Turners Cross.

A Jack Baxter volley, from 25 yards out, opened the scoring for Cork City, in the 81st minute. However, Maurice Nugent scored with a header, at the death to secure a deserved point for Galway United.

Talking points aplenty, as expected, in this, John Caulfield's return to the "Cross", in an opposition dugout.

There will be varied viewpoints on the influence of referee, Alan Carey, on proceedings.

An entertaining, relatively open game of football turned on, Carey's decision to send off Galway's Stephen Walsh, for an off-the-ball altercation in the Cork City goalmouth, before half-time.

Over the course of the contest, City received five yellow cards, and Galway had four booked, and a sending off.

The home side were the busier of the opening half.

Cian Bagary had a powerful shot dealt with by Conor Kearns in the Galway goal, in the opening minute.

It set the tone, as Bagary, Gearoid Morrissey, and Cian Murphy all had efforts for City.

Dylan McGlade, who was introduced as an early substitute for the injured Ronan Hurley, made an impact throughout the game.

Despite the home dominance, Galway remained active, and Mickey Place caused concern when he forced McNulty into a save.

Cork City appeared to be nervous, at times, under their opposition's set pieces and long throws.

The timeline was dramatically altered with the sending off, of Walsh.

The consequence of that saw a tighter second-half affair. Galway United continuing with one upfront, but sitting deep, while allowing City to dominate possession.

Turner's Cross was a powderkeg, as the referee was forced to issue six yellow cards in 10 second-half minutes.

Through the stop-start nature, football found a way back to the surface as Dylan McGlade went close on occasions, while also forcing Maurice Nugent into an excellent interception.

Jack Baxter, the loanee from Preston, broke the deadlock with textbook volley from 25 yards.

That goal forced the game to open up. Ruairi Keating, who had a quiet game, made his impact late on.

Maurice Nugent's late equaliser was the result of City's failure to clear their defensive lines. Nugent found himself free to head home.

Another late goal for John Caulfield's men, but on reflection the draw was a fair result.