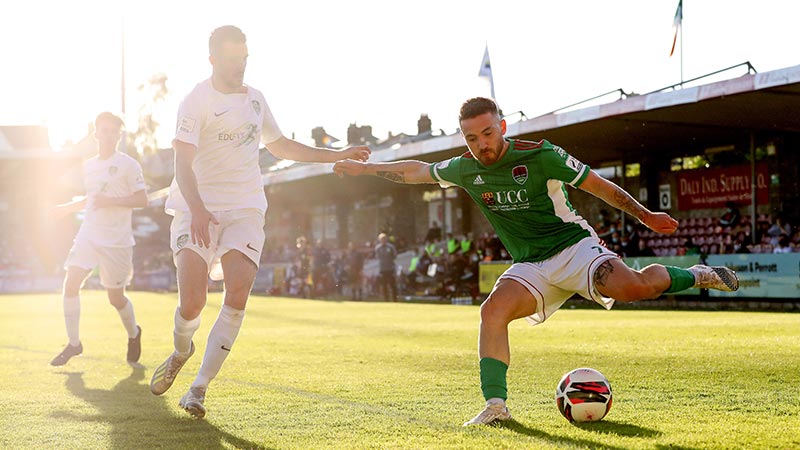 A frustrating return to Turner's Cross for 600 Cork City supporters who saw Cabinteely take the points in this Airtricity First Division League of Ireland fixture.

In a thoroughly fascinating encounter, Cork City dominated possession, but offered little in terms of penetration; while Cabinteely were content to feed during the scraps of a counterattack.

This was on par with a fight where one opponent was happy to take the best punches, without ever being troubled, before seizing their moment to deliver the knockdown.

Both of the visitors goals came towards the conclusion of the respective halves, and were a result of capitalising on a tired and spent City side.

The best of their chances were arguably delivered through Cian Bargary's corner kick deliveries, which routinely found the head of Cian Coleman.

The Rebel Army did advance with intent into the box but on a number of occasions shied away from taking the shot and instead looked to square the ball, which allowed Cabinteely's center-halves to recover and intercept.

When Cabinteely did get on the ball, Keith Dalton and Vilius Labutis were the source of ideas.

The game's opening goal arrived on 37 minutes, Ben Hanrahan's pacy run and cut back, cued up Labutis to take a touch before dispatching from outside the box, beyond Mark McNulty's reach.

Cork City remained competitive throughout and caused nervous moments for keeper Harry Halwax, who struggled when receiving the ball to his feet, but dealt comfortably with his hands when required.

City lost George Heaven and Bargary to injury, while frustration was evident as the yellow card count climbed.

Beineon O'Brien Whitmarsh was positive on his introduction, but in truth City ran out of ideas.

The game concluded with a great solo run by Sean McDonald, who consequently set up Jordan Payne to poke home for his first goal for Cabinteely.

Cabinteely climb to fourth, while Cork City drop to second from bottom.