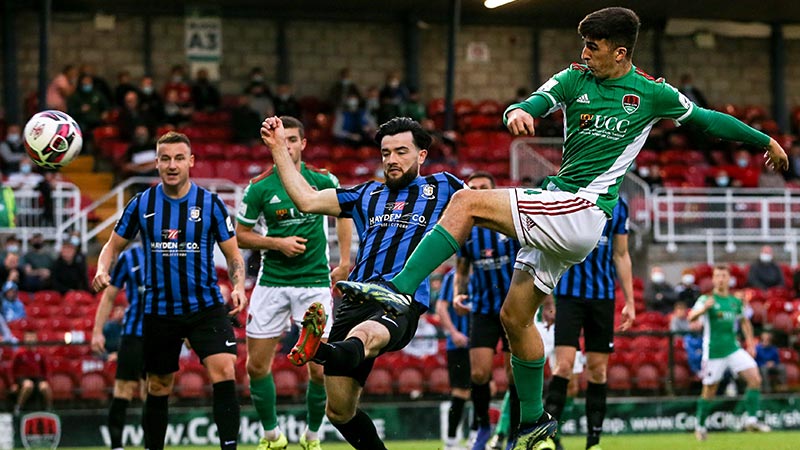 A fine first half from Cork City saw them claim all three points at home to Athlone Town, leapfrogging them in the First Division table in the process.

Early goals from Barry Coffey and Cian Murphy followed by a screamer from Dylan McGlade did the business. Kurtis Byrne got one for the visitors at the start of the second half, but they never built on it.

Cork wasted absolutely no time getting to work in this one. Two minutes in they got a throw and employed the services of long range throw in expert Cian Bargary. Bargary launched one in and after two flicked on headers, the ball found itself at the feet of Barry Coffey, who fired it into the roof of the net from close range.

They sustained the pressure on Athlone and were rewarded again barely five minutes later. Killian Cantwell got lackadaisical with the ball and attempted to play it back to Micheál Schlingermann in goals. His pass was well under-hit and Cian Murphy latched onto the loose ball before calmly slotting it past Schlingermann. Not even ten minutes had gone and it was starting to look like it would be an unforgettable night for both sides, for different reasons of course.

Cork kept the pressure up the entire first half and found their third reward in the 26th minute. Dylan McGlade received the ball way out on the left hand side and cut in to his right before letting fly. His effort from twenty yards out found the top corner and sent Turners Cross into absolute ecstasy. It stayed this way into the break.

Less than two minutes after the restart, Athlone made the game interesting. The ball fell to Kurtis Byrne on the edge of the area and with a first time strike he found the bottom corner with an outside of the foot shot. The goal was totally against the run of play and really surprised the home support.

The Midlanders gained momentum from this goal but couldn’t capitalise. Dangerous play from Byrne and James Doona occurred, but nothing concrete happened. City on the other hand failed to find their first half form. McGlade kept Athlone guessing, but despite this, neither side had any real chance after Byrne’s goal.

Alas, it did not matter for Cork as they managed another win. It takes them above Athlone in the table and it keeps their current run of fine form going, now moving to seven unbeaten in the league.