UCD one step away from promotion 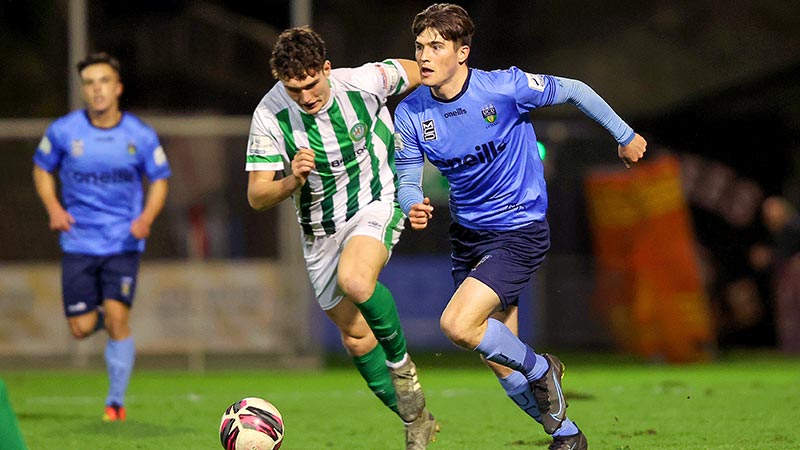 UCD have beat Bray 2-0 at Dalymount tonight to progress to the promotion/relegation final, where Waterford now await them after the closing events of the Premier Division.

Young striker Colm Whelan has been the star of this UCD team all season and this evening was no different when the stakes were at their highest.

He threatened all game and eventually found the net with a brilliant free kick in the 68th minute. Bray put in a commendable performance but ultimately lacked end product on the big night.

Paul Doyle added a second late on, also set up by Whelan.

Andy Myler’s team are past one showdown, but now comes the real test. A game next week against Waterford will be tough, who picked up a respectable draw with St.Pats tonight but finish 9th only for a Finn Harps thrashing over Longford.

Take nothing away from the achievement at hand though, the Students won comfortably in the end to win this First division play off. Myler will be pleased as his team stuck to their renowned attacking game plan through difficult periods of the game.

His good friend and Bray Wanderers manager Gary Cronin will struggle to hide his disappointment, as he did so well to get this Bray team here after they slipped up in last year’s play-offs too. His Seagulls were no mismatch and had fair spells of possession, but off days for some of their forwards led to a lack of incision.

The Dubliners may not be in the Premier Division yet but they will certainly celebrate this one. Star striker Colm Whelan was predicted to be Bray’s main problem and that was the case. Not only did he give his side the lead with a quality free kick that rooted his international team mate Brian Maher to the spot, but his touch was crisp and in general he was unplayable.

Sean Brennan formerly of Southampton was tonight’s rendition of what stats don’t show you. His break-up play got UCD through this affair just as much as Whelan and Liam Kerrigan’s attacking prowess.  Paul Doyle worked hard all night so there could be no complaints when he scored their second with three minutes left.

The game was there for the Seagulls really, but they seemed to play the occasion. Brandon Kavanagh and Ryan Graydon looked lively but simply ran out of ideas. It also can’t be denied that the Wicklow outfit suffered the absence of Conor Clifford.