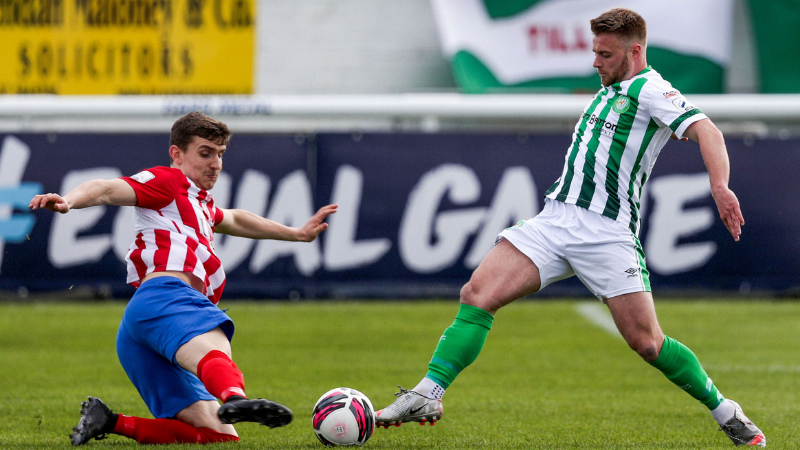 A last minute Conor Clifford penalty sent The Seagulls into third place following Bray Wanderers 1-0 win over Treaty United in the League of Ireland First Division in a hard fought win at the Carlisle Grounds tonight.

Neither side were able to make the breakthrough in the first 90 minutes despite the two teams making some good chances to steal all three points.

However, Bray remained cool, and forced an injury-time penalty, to ensure they stay in the hunt heading into the final stretch of the season.

It was a relatively quiet first half at the with Gary Cronin’s side having the majority of the possession. Darren Craven was lively down the Bray left wing and almost opened the scoring just inside the first half hour. Dan Jones’ cross field ball found Joe Doyle inside the Treaty United box who then laid the ball into the path of Craven but the in-form Seagulls’ man struggled to get a proper connection on his shot which rolled into the palms of Tadgh Ryan in the Treaty net.

Craven came close again just before half time after Dylan Barnett burst down the Bray left hand side on the counter attack. Barnett played the ball into Craven who cut in onto his right foot but his curled effort went over the Treaty net and out for a goal kick. Sean McSweeney was the visitors star man during the first half as he tried his best to dictate play for the away side throughout the first period.

Bray started the second period in the same fashion as the first and dominated the ball early on. Treaty United had a big opportunity and found themselves with a three against one counter attack after the home side sent big numbers forward for a corner kick. Conor Melody had two men overlapping to his right but the Limerick striker opted to try and dink Brian Maher from around 30 yards out. Melody’s effort flew over both Maher and the Bray net.

The arrival of Joel Coustrain off the bench for the visitors was an effective one and Tommy Barrett’s decision to bring the forward on was almost justified when he and McSweeney linked up well just outside the Bray box but McSweeney’s effort went wide of the target.

Just as it looked like both sides were going to have to settle for a share of the spoils, Brandon Kavanagh was brought down in the Treaty area in the 90th minute and referee Kevin O’Sullivan pointed to the spot. Skipper Conor Clifford stepped up and sent Tadgh Ryan the wrong way to bag his third goal of the season and send the Seagulls ahead of Treaty into third place on goal difference.