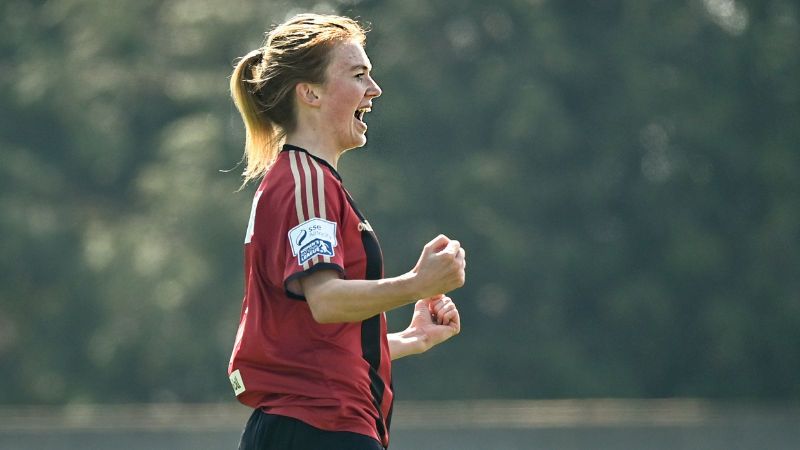 Bohemians cruised to a 5-1 victory over Treaty United this afternoon in the Women’s National League.

First half strikes from Lisa Murphy and Erica Burke gave Sean Byrne’s side an early advantage before Aoife Brophy, Chloe Darby and Lara Phipps sealed all three points for the home team.

Bohs dominated the first half from early on and looked dangerous anytime that they attacked due to the speed of Brophy, Kane and Burke.

Treaty did have chances of their own in the first period courtesy of some brilliant link up play between Cara Griffin and Jenna Slattery. Slattery found Griffin in acres of space inside the Treaty area but her effort was well saved by Courtney Maguire.

Bohs took the lead after just under 30 minutes played when Chloe Darby’s corner was met by the head of Lisa Murphy who fired home into the bottom corner to give the home side the lead.

Bohemians doubled their lead minutes before the interval when Niamh Kenna’s cross found Aoife Brophy inside the Treaty box. Brophy’s shot was well saved by Mitchell but only as far as Erica Burke who made no mistake from close range to give her side a two goal advantage heading into the break.

Heavy rain began to fall at the start of the second period and both sides started the half in a sloppy manner with neither team seriously threatening each other until a brilliant strike from Aoife Brophy. McKenna’s ball into the area found the ever lively Brophy who turned her marker and smashed home from just inside the box to give her side a three goal advantage.

Sean Byrne’s side didn’t ease off the pressure and with just under ten minutes to go, Finnegan’s corner found Chloe Darby whose bullet header flew into the top right corner to increase Bohs lead yet again. In the dying moments a menacing Jenna Slattery run through the Bohs defense forced Isobel Finnegan to make a challenge inside her own area. The referee pointed to the spot and awarded a penalty to Treaty United. Slattery stood up and fired the ball hard and low to the right of Courtney Maguire to give the travelling side a consolation goal.

Bohemian’s yet again refused to stop pushing for more. Lara Phipps’ run from kick off resulted in the substitute getting on the scoresheet and seal a 5-1 win for The Gypsies.