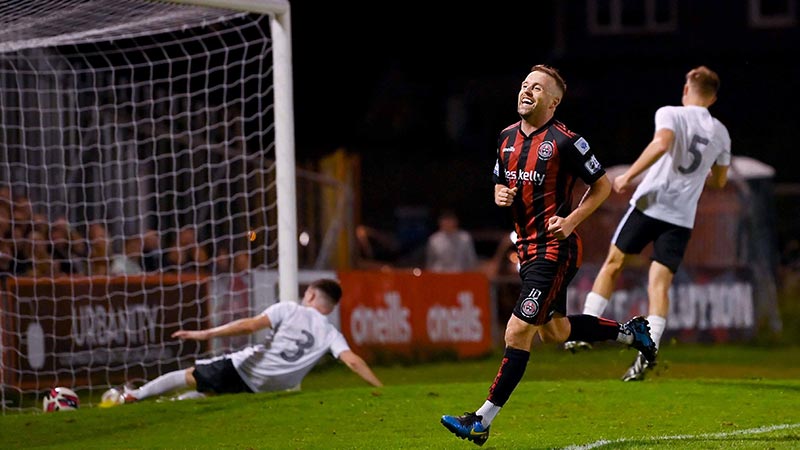 Bohemians progressed to the semi-finals of the FAI Cup in sublime fashion tonight, steamrolling Maynooth University Town by 4-0.

This game was over by half-time, after a trio of first half goals from the midfield triplet of Keith Buckley, Conor Levingston and Keith Ward.

New boy and substitute Roland Idowu added a fourth goal just after the hour mark, rounding off the evening at Dalymount.

The game started somewhat evenly. Both teams played some nice football, with Maynooth impressively not looking out of place. 17 minutes in however, Bohs took the lead. They made their way into the Maynooth box and after an initial effort was blocked, the ball fell to the captain Keith Buckley. After one touch the skipper poked the ball home, giving his side the lead. Bohs never looked back from this moment on.

On the half-hour mark, the game changed. Maynooth captain Conor Dunne picked up a booking and the next ten minutes decided the game. Less than five minutes after his captain was booked, Alex Kelly recklessly went into a 50/50, catching Dawson Devoy high. The ref was left with no decision and sent Kelly straight off. Thankfully, Devoy came away unscathed.

The floodgates gushed open after this. Two minutes after the sending off, Tyreke Wilson made his way forward down the left hand side. He pulled a ball back into the area, which was met by Conor Levingston, who hit it first time and found the net. This started what could’ve been an onslaught.

Two minutes later any possible doubt was put to bed. Maynooth lost possession whilst pushing forward and a long pass forward found Keith Ward. Ward strolled through on goal and put a third past David Sterio. The Kildaremen were lucky it stayed 3-0 into the break.

Jamie Mullins put in a notable performance for Bohs, despite not getting on the scoresheet. The 16 year old had a good chance in the 55th minute when a fine cross from the right from Keith Ward flashed across the face of goal just begging for a touch. Mullins couldn’t make contact however. Another chance fell his way a minute later, when he tried one from just outside the area after a one-two, but dragged the shot wide. Despite not scoring, Keith Long will be pleased with the man of the match.

The cake got its icing in the 61st minute when substitute and debutant Roland Idowu cut onto his left foot, finding the bottom corner from range. Bohs simply managed the game from then on out, heading into the semis with great confidence.