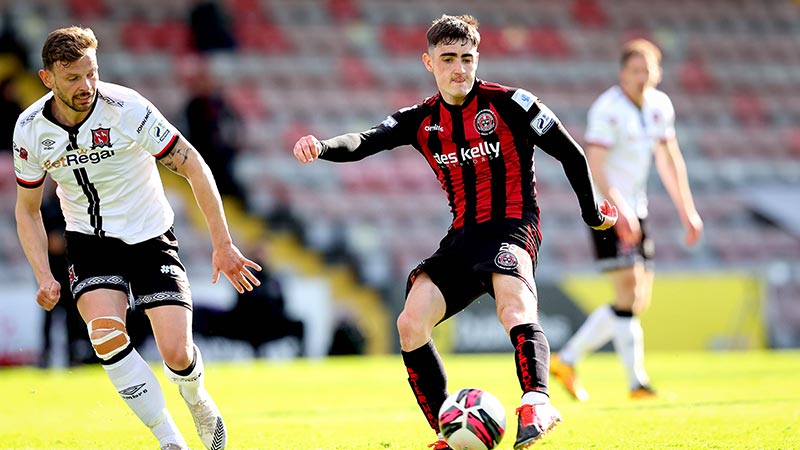 It was a case of Dundalk’s defensive frailties, and a night to remember for Georgie Kelly, as he grabbed his first Premier Division hat-trick as Bohemians dispatched the Lilywhites with a comprehensive 5-1 victory at Dalymount Park.

Both sides were reduced to ten men, with Bohemians goalscorer Tyreke Wilson and his Dundalk counterpart Cameron Dummigan sent off for two bookable offences.

Greg Sloggett's stunning effort was scant consolation on a dreadful night for Dundalk, and a brilliant night for Bohemians.

Bohs got off to the perfect start with two goals in the opening ten minutes, Tierney latched onto a cross, and he in turn fed it into Kelly who turned in the area and slotted it past Abibi at the near post. Dundalk hadn't finished dusting themselves off only to find themselves 2-0 down. Tyreke Wilson curled an excellent free-kick over the wall and past Abibi into his right-hand corner to give the home side the perfect start.

If Jim Magilton was going to look for a proactive response, he got it only in fleeting moments as Dundalk never found their groove against a slick Bohs. The best chance for the Lilywhites fell to McEleney who sent in a teasing cross to David McMillan's but the header didn’t have the desired effect.

On the restart Bohemians pushed Dundalk to the sword as Kelly continued to torment his former employers. He started and finished a clever counterattack as the striker applied a clever finish to slot it past Abibi at the far post with ease. He got his hattrick midway through the second half as a freekick sent in by Burt was nodded home by Kelly to claim the match ball.

Dundalk rung in the changes and it was one of those players that provided scant consolation for the Louth side. Sloggett’s excellently taken goal left Talbot no chance of stopping it but that was as good as it got for Dundalk.

A bad evening turned worse when in the final moments of the match Promise Omochere turned Shields on a sixpence and with Abibi inviting the shot he slammed the fifth goal for the home side make it a great night for Bohemians.