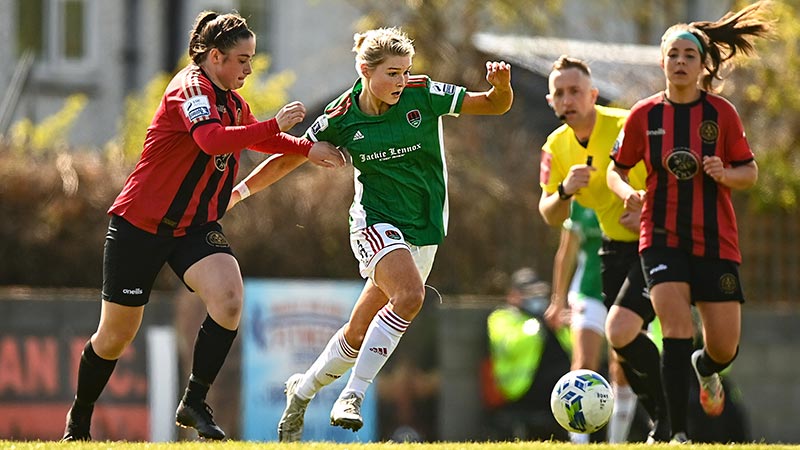 A late Chloe Darby penalty ensured a share of the spoils in a six-goal thriller at the Oscar Traynor Centre for both Bohemians and Cork City.

Darby's effort at the death, means that City are still awaiting their first win of the season.

Despite going a goal down, a quick fire brace from Laura Edbuloniu put Cork in a healthy position. In what was an entertaining game both sides will feel they missed chances to clinch the tie.

Bohemians got off to the perfect start as they took the lead through Erica Burke. She took the ball off the Cork defender and had the easiest of tasks to slot it past McCarthy to open the scoring after just four minutes. The hosts continued to press and Chemaou's free-kick nearly caught McCarthy off guard in the visitors goal but she caught the ball at the last second.

It was going to take something special to beat the Bohs defence and Edbuloniu did so with a low range overhead kick that saw the striker equalize for Cork City. She added to her tally a moment later after a cross from the left initially fell to Dring but her deflected effort fell kindly to the eventual goal-scorer who slotted home from close range.

Sophie Watters had two attempts to equalize only for the goal and the steady hands to evade her, the latter chance saw her chip the keeper from the edge of the area that McCarthy had to tip over the bar.

Niamh Coombes had to be called into action early in the second half as City broke down on the left and Coombes cleared the ball at the edge of the area. The Turners Cross outfit had a great chance to go further ahead as Mangan got the ball at the back post but her effort hit the side netting.

Aoife Robinson has a knack of being sprung from the bench to score and she did so again as he took her goal excellently converting at the back post following some very clever build-up play. The celebrations were short-lived as a mix-up at the back saw Niamh Coombes lose possession and Laura Shine hit a fantastic strike to put Cork back ahead.

There was still more to come as Bohemians were awarded a penalty and Chloe Darby despatched it with ease to tie up the game. McCarthy was called into action for one last time as she made a fantastic save after a shot from range that she was outstretched to turn around the post for a corner but Bohemians couldn’t force a winner.

A share of the points but both sides will feel they left the win behind them. Cork City are still looking for their first victory of the season. For Bohemians next week is a crunch tie with Peamount United.