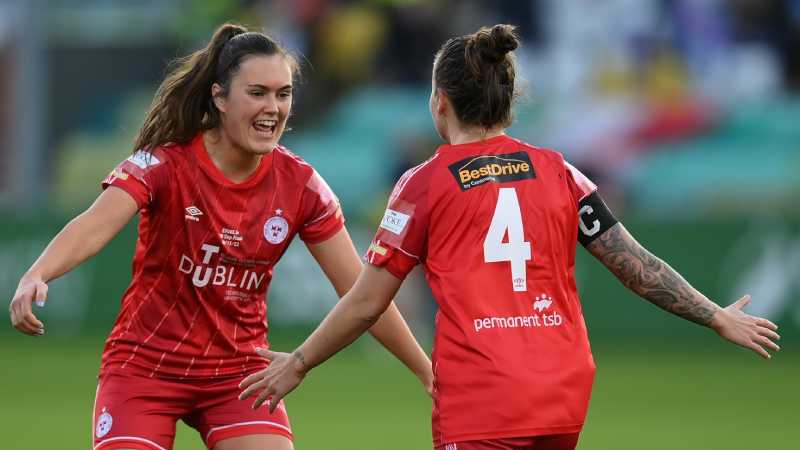 Shelbourne sealed the double following a 2-0 win over Athlone Town in the FAI Women's Cup Final in Tallaght Stadium this evening.

Two fortunate goals in the first half from set pieces sealed it for Shels. Jessica Stapleton gave them the lead in the 6th minute, whilst Pearl Slattery doubled their lead in the 23rd.

It went from bad to worse for Athlone in the 23rd minute after Coombes dealt with another set piece poorly. Megan Smyth Lynch whipped in the corner from the right and the Athlone keeper came out to punch it clear.

She once again got her queues all wrong and the ball fell right to Pearl Slattery. The skipper put it in to double her side's lead and Athlone were in a serious hole.

From here on out, Athlone would threaten but to no avail. There were a couple of half chances before the break, but none clear cut.

It could’ve been 3-0 five minutes out of the interval when Keeva Keenan sent one in from the right. Her mis-hit cross rattled the bar and Athlone managed to survive the effort.

Tommy Hewitt rolled the dice with a triple sub before the hour mark, sending on Kate Slevin, Kellie Brennan and Kayleigh Shine. Brennan and Slevin seemed to have made a difference.

The Town stuck it into the net in the 70th minute. Madison Gibson whipped in a second ball from a corner and Scarlett Heron headed in, but the flag went up. Initial replays suggest it was a harsh call.

They would miss a golden chance in the 78th minute when Brennan laid off Gibson in the box. Gibson took it on her right with the goal gaping, but blazed over. It was clear it was not Athlone’s day.

Brennan herself could’ve had a goal two minutes later. She bombed down the right-hand side of the box and got a shot off, but Kavangh’s tremendous block kept it out. This would be enough for The Reds.

With this win, Shels sealed the double. They also manage to overcome losing last year's final, so Noel King and his side will be thrilled. Athlone may be going home empty handed, but with a young side they have to know the future is bright.