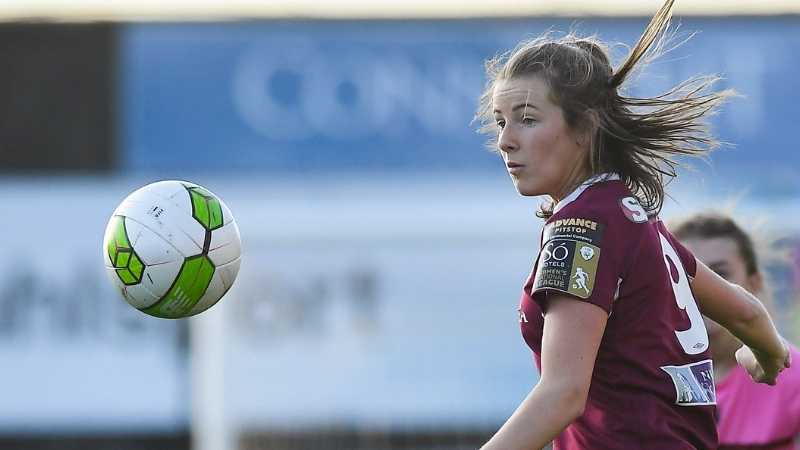 Galway came away from Lissywollen with all three points after a Chloe Singleton first half strike and an Anna Fahey header late on got the job done for Stephen Lally’s side.

The visitors dominated possession in the first half and went in at the break leading. Athlone fought back in the second and a freak goal from Lucy Jane Grant nearly had the visitors kicking themselves, but Galway managed to have the final say

Galway started this game well. While they didn’t break through in the first 20 minutes, they controlled possession and Athlone remained camped in their own half.

The first flash point came from Lynsey McKey, who from the right hand side whipped a ball in that came close to going straight in. It was unclear whether it was a shot or cross, but it wouldn’t be the last time this happened in this game.

Galway were rewarded two minutes later when Nicole McNamara got the ball in midfield and played a nice ball over the top for Singleton. The right winger burst down the right hand side and slammed it into the top corner, a strike worthy of giving her side the lead.

McKey had a strikingly similar chance around the half hour mark, when despite being from a tight angle on the far right, tried to fire a ball into the Athlone box. Again, whether she meant it or not was unclear, but she was brutally unlucky as the ball hit the inside of the left hand post. Galway would stay one up until the break.

There were few chances up until the 57th minute, when a free kick way out on the right gave Athlone a chance to threaten. Substitute Lucy Jane Grant stepped up and the ball flew into the top left corner. Like McKey twice before her, the intentions were unclear. However, the goal was impressive and Athlone weren’t going to care if it meant they got something from this game.

Momentum started to go the Midlanders way and Galway probably felt like kicking themselves. For a team that dominated possession in the first half, they were somehow all tied to a team that had been camped in their half most the game. T

hey were nearly further punished in the 70th minute, when a ball to the back post found its way to Kellie Brennan, who tested Hannah Walsh at her near post. Galway’s keeper was equal to the effort, however.

Galway avoided dropping points five minutes from time when McKey put in a beautiful corner. Anna Fahey rose highest and buried the ball into the back of the net. It was all the Tribeswomen needed to secure the points.

For Athlone, it’s yet another defeat. All manager Tommy Hewitt can do is see what lays in store the rest of the way and see what has to be improved on next season.

For Stephen Lally however, it’s hopefully a confidence booster. He’ll be hoping the first half injuries to Shauna Brennan and Nicole McNamara are nothing to worry over, however.