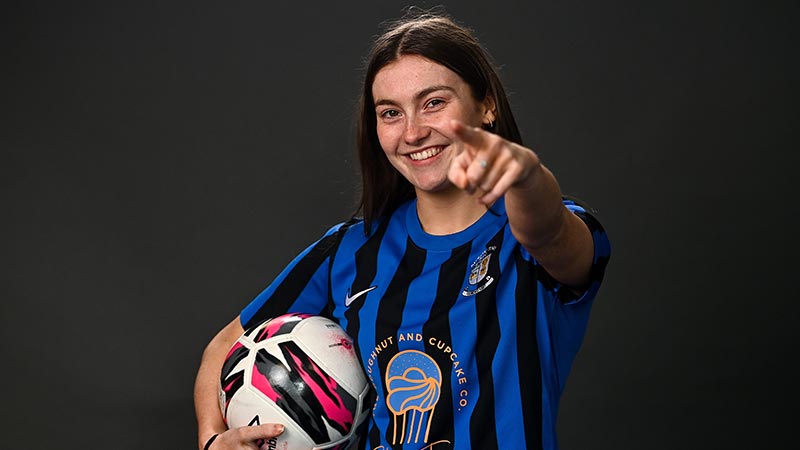 Bohemians leave Lissywoolen with all three points after their Womens National League meeting with Athlone, as a Burke brace and second half strike from Chloe Darby cancelled out goals by Katelyn Keogh and Roisin Molloy for the Midlanders.

In the opening minutes Bohemians looked liveliest with a couple of early free kicks testing debutant Ria McPhilbin in the Athlone net. As the minutes wore on the Midlanders grew into the game and took the lead after a superb through ball from Emily Corbett found its way to Katelyn Keogh, who, at the first time of asking slotted the ball past Maguire in the Bohemians goal.

Athlone were dominating the half when against the run of play Erica Burke was taken down inside the area by McPhilbin, and referee Micheal Connolly didn’t hesitate to point to the spot. Burke stepped up herself and easily slotted the ball low to the keepers left.

Soon after Bohemians took the lead again through Burke. Bronagh Kane spotted the run of Burke and popped the ball in her direction. Burke; however, still had a lot to do but with an insightful flick off the outside of her boot she played herself into space and coolly stuck the ball into the back of McPhilbins goal.

In the lead up to the goal Leah Brady collided with Burke and went to ground, and in the aftermath was stretchered of with what seemed like a knee injury.

Athlone found themselves controlling the game for much of the half as the went in search of an equaliser, with the closest chance coming from a series of corners at the end of the half.

Athlone started brightly in the second half just as they ended the first throwing everything at Bohemians, but nothing would stick.

Eventually in the 55th minute, one of Emma Donohues many corners found midfielder Roisin Molloy at the near post, Molloy, happily accepted the responsibility of heading it goalward scoring the equaliser.

The game was slowing and neither team seemed interested in pushing for a winner when Fiona Owens needlessly kicked out earning a yellow card and what turned out to be a costly free kick.

The free, taken long was dropped by McPhilben in the Athlone goal and Chloe Darby was at hand to smash in the winner and take all three points back down the road.

Athlone dominated possession for the rest of the match throwing everything they could at the Bohs defence, but they stood hard and stubborn and saw out the game to move above the hosts in the table.