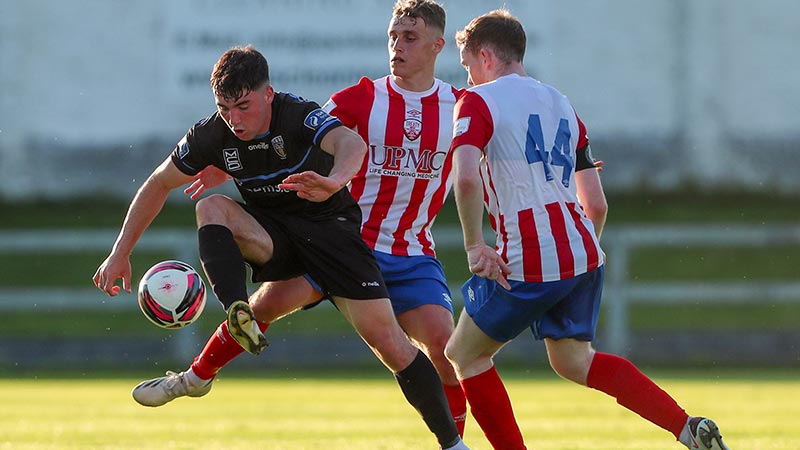 UCD won what could potentially be a playoff's preview, with a 2-1 win over Treaty United in Belfield.

A Liam Kerrigan goal accompanied by an unfortunate Anthony O’Donnell own goal sealed the deal for the Students.

Dean George got the visitors one of their own, but it wasn’t enough.

There weren’t many chances in the opening few minutes in this one. Sam Todd rose highest from a corner at one stage and forced a save from Tadhg Ryan right before the ten-minute mark.

The breakthrough came 14 minutes in. A long ball forward found its way to Liam Kerrigan, who hit a shot first time and sent it past Tadhg Ryan. The U21 international only needed one chance to make his mark.

UCD controlled the rest of the half. Sean Brennan forced a good save from Ryan in the 31st minute after his strike just outside the area was palmed out as it looked like it was headed for the top corner. From the ensuing set piece, Todd again rose highest, this time hitting the bar.

Jack Coustrain got Treaty their only real chance of the half a minute before the break. From the second phase off a corner, he turned and shot from way out. What seemed to be a hit and hope ended up just going wide.

Treaty got a goal five minutes after the restart however. Dean George was played through and in similar fashion to Kerrigan, took his chance and slotted it away. It was against the run of play, so UCD must have been sick at the earlier chances missed.

Treaty would then go on to control the next 10-15 minutes. In the 57th minute they had numerous shots in the box blocked consecutively. Joe Collins had a deflected shot just go wide on the hour mark. Not long after, George attempted to get a brace by attempting an overhead kick from a corner, which just went after. They would rue these missed chances.

15 minutes from time, Liam Kerrigan came inside down the by-line thanks to some nice footwork. His low drilled cross found the leg of Anthony O’Donnell, who accidentally put it into his own net.

The only way now this won’t be the playoff matchup is if Treaty lose next week and Bray win. It seems safe to assume that what we saw tonight is indeed the preview.