Treaty and Cork tied in Limerick 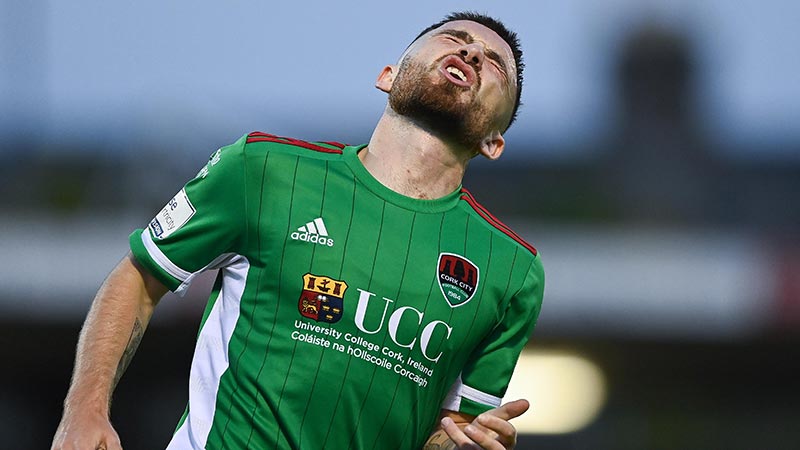 Treaty United and Cork City played out an entertaining but scoreless draw at the Market's Field without really creating any trouble for either goalkeeper during the 90 minutes.

The brightest element of the Munster Derby this evening was the constant flares from the newly returned supporters.

The lively Dylan McGlade and Cian Bargary were the most likely to create a breakthrough for the visitors but Cork will be happy to have avoided a whitewash in this fixture this season.

It was expected to be a clash of styles with Colin Healy's side known for a flowing brand of football while Tommy Barrett's league debutants have developed a reputation as a tough physical side who are difficult to break down and rely heavily on set pieces in the forward areas of the pitch.

The early exchanges reflected this with Cork City controlling the opening quarter hour with a number of bright attacks down either wing as McGlade and Bargary were given the space to run at the Treaty defence.

The first meaningful attack would come at the other end though. A well timed defensive tackle from Treaty's Anthony O'Donnell allowed the defender to play a ball through to O'Hanlon but McNulty in the Cork goal read the situation excellently and cleared the danger.

Moments later it was Cork skipper Cian Coleman who intervened as the Limerick side threatened to open scoring but had to settle for a corner from the move.

McGlade and Cian Murphy joined forces to create a great opportunity for McGlade but his effort didn't trouble Ryan in the Treaty goal when maybe a team mate might have been better positioned to strike.

The opening of the second half was once again disturbed by flares being thrown on the pitch, a recurring event throughout the entire match which caused the game to be held up a few times this evening.

When play resumed Cian Murphy found some space on the right wing and his cutback fell at the feet of Barry Coffey but the midfielder couldn't get his effort on target as it went to the outside of the far post.

Second half substitutions from both sides threathened to break the deadlock almost instantly with Sean McSweeney creating an opportunity for Stephen Christopher but he saw his effort come back off a Cork defender.

At the other end Sean Kennedy chases a lost cause into the corner and his ball to Dale Holland saw his effort going narrowly wide of Ryan's far post.

The final opportunity of the game fell to Treaty but the cross from Willie Armshaw is just too far ahead of McSweeney and he can't control his header and the opportunity passed.

The result virtually leaves Treaty just one game short of securing a play off spot and almost certainly rules Cork's interest in promotion out for this year.