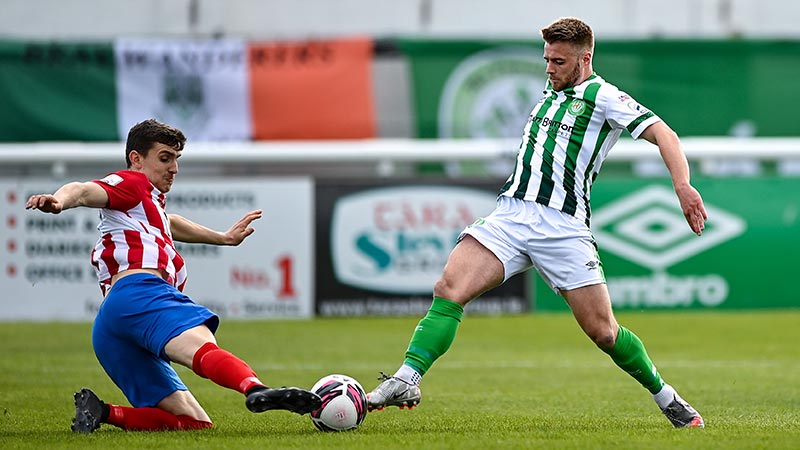 Cabinteely got their first win in eight after a second half comeback against their east coast rivals Bray Wanderers in the Carlisle Grounds tonight.

A Conor Clifford free right on the verge of half time gave the hosts the lead, but a Kevin Knight penalty and a Mark Byrne own goal flipped the script in the second half.

Throughout the first half, the hosts controlled possession but couldn’t get any clear cut chances. Barnett, Kavanagh and Thompson were the main players, with play down either wing threatening the visitors from time to time.

Richie O’Farrell nearly scored a goal of the season contender when his long range effort hit the post in the 35th minute.

The breakthrough came on the verge of half-time. Craven was fouled by Byrne on the edge of the area from a throw in and Clifford hit the short range free. His effort was right at Hayden, who seemed to be caught cold by a bounce and it went in. Nonetheless, the timing couldn’t have been better for Bray.

The tempo was slow and neither team was dominating the second half up until Knight’s goal. Cabinteely won a corner and the second ball fell to Byrne, who beat his man and was fouled just inside the area. Kevin Knight stepped up and made no mistake, putting it down the middle to give Cabinteely life.

Much like the moments building up to the goal, neither side was taking control in the build up to the winner. Barnett, Kavanagh and O’Farrell all had efforts but nothing concrete.

The winner came in slightly fortuitous fashion for Cabinteely. They initially attempted to hit Bray on the counter attack, but the Bray defence staved off the initial effort and managed to get men back. This proved all for nought however, after Eoin Massey’s cross made its’ way to Luke McWilliams at the back post, who attempted to square it to a teammate. Mark Byrne stuck out a leg to deal with the pass, but the contact was all wrong and he stuck it into his own net. This was a result of Bray failing to take their chances.

For the rest of the game, Bray couldn’t get through on goal. Their play lacked a sense of urgency. This is meaningless now however, as Athlone Town failed to capitalise on the Bray loss, which means Wanderers will now definitely take place in the promotion play offs.