Doherty and Robinson deliver for Wexford 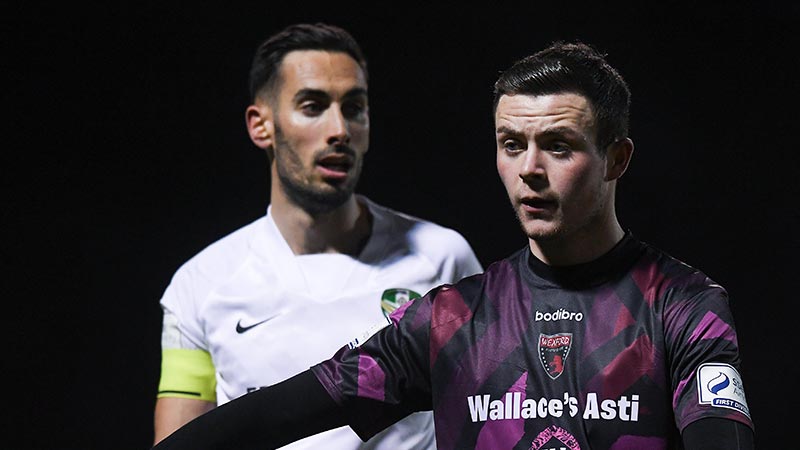 Goals from Jack Doherty and Kyle Robinson helped Wexford FC to a superb 2-1 win over UCD tonight at Ferrycarrig Park in the First Division. The result means that they find themselves just a point behind ninth placed Cobh Ramblers.

Tonight’s victory is testament to the incredible work that manager Ian Ryan has done since joining in May.

The hosts looked comfortable on the ball and dominated large spells against one of the best sides in the division.

Neither side was able to carve out many clear-cut chances in a balanced opening 20 minutes. Thomas Considine came closest for the hosts when a Kevin McEvoy ball bounced fortunately for him, but his timid effort was an easy save for Carl Williams.

Just after the half hour mark Ian Ryan’s side took a deserved lead. Jack Moylan slipped the ball through for Jack Doherty who saw his close range effort deflected into the back of the net.

Liam Kerrigan proved to be a thorn in Wexford’s side for most of the first-half but he failed to convert any chances and The Students went into the break a goal down.

Andrew Myler’s half-time team talk clearly worked, as the visitors looked reinvigorated after the restart. A lobbed pass from Jack Keaney floated over the Wexford defence and Kerrigan fired home the equaliser into the bottom corner.

Kerrigan and company caused havoc for the opening 10 minutes of the second-half. Jimmy Corcoran stepped up to make two big saves against the goal scorer and Mark Dignam.

Around the hour mark the Wexford of the first-half seemed to reappear. Carl Williams was forced into making a great save from a Doherty free-kick.

On 62 minutes, the winner came. Paul Cleary’s quick free-kick over the top was brought down brilliantly by Kyle Robinson. Robinson drove towards goal and managed to squeeze the ball past Williams from a tight angle.

Tonight’s result gives Wexford the platform to finally move up from the bottom of the table, having made up the 10-point gap between them and ninth position. As for the Students, tonight will be seen as a missed opportunity to secure their place in the play-offs.