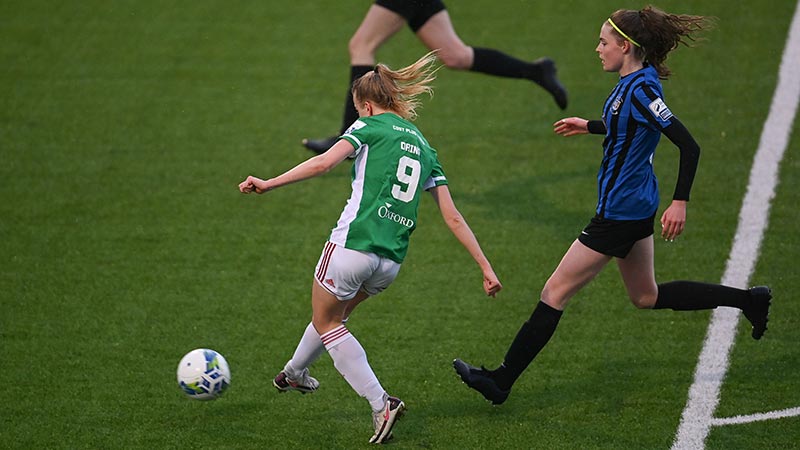 Christina Dring’s late equaliser for Cork ensured a share of the spoils with Athlone Town at Turners Cross this afternoon in the Womens National League.

'A goal’s a goal no matter what way it goes over the line' is a rhetoric that stood steadfast in this tie, and for long periods it looked like the visitors who might come away with a vital win.

Melissa O’Kane capitalised on a breakdown of communication between Cork’s backline to open the scoring in the 19th minute.

While City equalised via Eabha O’Mahony shortly after the half hour mark, it looked like Athlone had claimed a controversial winner in the form of a Roisin Molloy goal; before Dring's effort late on.

A scramble of defensive errors saw O’Kane set the ball rolling Leeside, after a searching Chloe Flynn ball found the resolute Muireann Devaney and eventually landed at the feet of The Town’s number 22, who only had to slot the ball into the back of an empty net; and done so with ease.

The playing field was then levelled when City equalised via O’Mahony just after the half hour mark. She delivered a thunderbolt on the edge of the box, which was no match for Athlone’s keeper.

Worryingly for the home supporters, Becky Cassin took a hard blow and went to ground injured just before the interval. The half was blown up at a goal apiece while she remained on the pitch receiving treatment, but luckily for City and the Women’s National League the captain returned to the pitch after the break.

Next came a goal in which will arise much debate in the following days. An O’Kane corner fell to Roisin Molloy who struck the ball towards the goalmouth. While Abby McCarthy held onto the ball strongly with both hands and City pleaded that she was fouled in the process, the keeper was deemed to have been over the line by the referee and the goal stood for Athlone.

The WNL has become synonymous with late goals in recent weeks and another one was witnessed today when Dring put away an equaliser for Cork in the 90thminute to ensure a palindrome draw for her side.

The result means both sides remain at the basement of the league with seven points, Cork edging just ahead of goal difference.