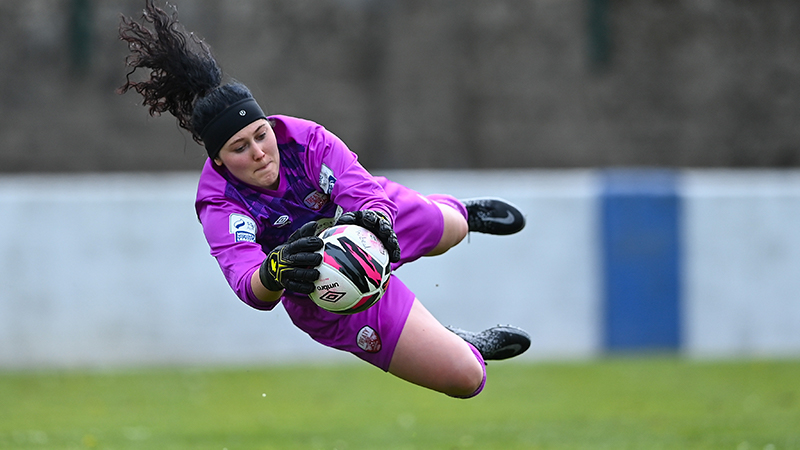 Treaty United picked up their first win of the season to leapfrog Cork City in the SSE Airtricity WNL at Turner’s Cross this afternoon. Rebecca Horgan was the standout performer for United scoring two goals.

Cork managed to pull the score back to one-one after half an hour, with a Sarah McKevitt screamer. However,the visitors answered back with another Horgan goal and a Gillian Keenan top corner strike.

A late penalty for Cork made it a nervy end, but United were able to see out the final minutes.

Niall Connolly’s side came out the stronger of the two, with some fast attacks causing the home defence some problems. This would come to fruition, as Horgan took a pop at goal from just outside the box. The ball was helped over the line by McCarthy in the City net, a bad mistake.

But the Turner’s Cross outfit would come back into the game, Sarah McKevitt controlled the ball 25 yards out, and smashed a shot towards the goal. Her effort dipped and crept just under the bar, game on.

Treaty however, weren’t fazed by conceding, they looked nothing like a side without a win. Goalkeeper Mitchell pumped a long pass in behind the Rebels’ defence, Horgan ghosted in using her pace, and finished while falling over to regain the lead.

Relentless, the visitors didn’t let up. Attacks continued to flow, and just after the hour mark, Gillian Keenan picked up the ball in a little space. She cut inside and whipped the ball into the top corner – 3-1.

This seemed to kill any confidence that Cork had left, and the game looked to be fizzling out. An injury for Katie McCarthy caused a late rally.

Some pressure on the away goal caused a defensive lapse, and Becky Cassin was bundled over in the box. Penalty.

She coolly slotted the spot-kick home, to give a faint glimmer of hope. That chink was short lived as the final whistle was blown.

Treaty will be delighted with both the result and performance. The three points help them move up two places in the table, most importantly above Cork City have got plenty of work to do, as they’re still searching for that elusive victory.