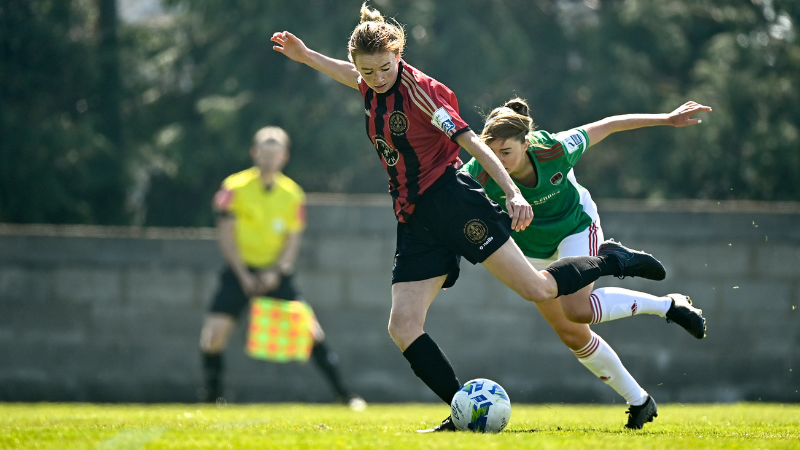 Bohemians got past the struggling Cork City today with relative ease in a 2-0 victory at the Oscar Traynor Centre.

It was a scrappy game with few great chances but an Erica Burke penalty and a Lisa Murphy wonder strike did the necessary for Sean Byrne’s Gypsies.

Bohs always had most of the ball but they would only find the breakthrough in the 50th minute when Burke slotted the penalty before Murphy added the second in the 78th minute.

It might not have been the most beautiful win, but it was pragmatic football from the North Dublin side, and it was a vital three points. They showed hints of nice football in the first half through the likes of Chloe Darby and Abbie Brophy out wide; however they lacked that bit of incision.

What they did do though was manage the rest of the half and the game in a way that meant they were always the team most likely to get the breakthrough. They stayed solid at the back and never gave Cork any space on the break. Lisa Murphy in particular was quality in the middle of the park, both going forward and breaking up counter attacks.

As for the rebels, apart from a few short spells of possession they never really got going and never threatened Courtney Maguire. Becky Cassin was always going to be their goal threat but she struggled to get involved. Eva Mangan was set up to be the outlet ball for Cassin but she was consistently drowned out by the home midfield.

A penalty in the 50th minute was probably just what the hosts needed in this type of game. The more the game went on scoreless the more you wondered was it the City’s day. Erica Burke was brought down and proceeded to slot it past Abbie McCarthy, giving Bohs just the breather they needed.

The next minute proceeded to be the most frantic of a quiet game as Cork went up the other end and won a penalty of their own. However top scorer and Captain Cassin hit a surprisingly tame spot kick and Maguire was able to almost gather it up.

From here on Ronan Collins’ rebels looked somewhat lost and the game started to feel like a matter of how many Bohs could add. Murphy did just that with her strike from distance in the 78th minute and the game finished in a comfortable but hugely important win