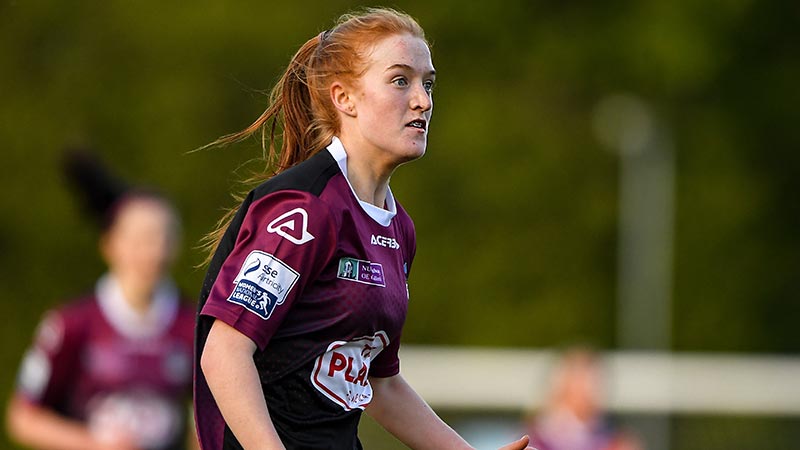 Bohemians and Galway split the honours in their WNL clash at Dalymount Park today.

The result is a fair one, given the balance of play. Both teams threatened plenty throughout the game and fought hard in a somewhat physical encounter.

Sinead O’Donovan put Galway in front right before the half hour mark, but that wasn’t enough for the visitors, as a Chloe Darby free less than five minutes from the whistle ensured the hosts snatched a point.

Bohemians threatened more often while either side had yet to find the net, but as Galway started to find their feet, Sinead O’Donovan ensured the visitors took the lead.

After a failed cross from the left turned into a back and forth battle for possession just outside the Bohemians penalty area, the ball found its way to O’Donovan, who with a first time strike found the top corner with her right foot. There was nothing Courtney Maguire in the Bohemians net could do to stop it.

Bohs looked lively before the end of the half but never had a clear cut chance. Abbie Brophy in particular looked dangerous for Dublin’s originals on the right wing.

The referee made a game changing decision right on the brink of half time, after Aoife Thompson appeared to be taken down by Maguire after being slipped through. The referee however, gave a free out and judged that Thompson had dived. A replay would have been handy, but the official seemed convinced in their call.

Bohs then started the second half well but tended to play around with the ball when they had it, rather than attempting to punish Galway. This nearly came back to bite them when Sinead O’Donovan attempted another long ranger, from even further out than her first. This one would’ve managed to top that, but Maguire rose to the occasion, tipping the shot over the bar.

With 15 minutes to go O’Flaherty was forced off with an injury for Galway and was replaced by Van Niekerk. The sub then nearly made an instant impact, meeting a lofted free in just inches from goal. The header however went wide, which would cost Galway just five minutes later.

Galway gave away a sloppy free on the edge of the area and Chloe Darby stepped up to take it. Despite a tame effort, the shot went in after Maja Zajc in the Galway net appeared to be wrong footed, an incident she’ll wish she could’ve had back. Bohs won’t care however, as that was enough to earn them a point.

The result was reflective of a fair game and both teams seasons. Both team remain in midtable and can take both pros and cons from this one. Player of the match has to go to Courtney Maguire, whose saves kept Bohs in the game and ended up proving vital.