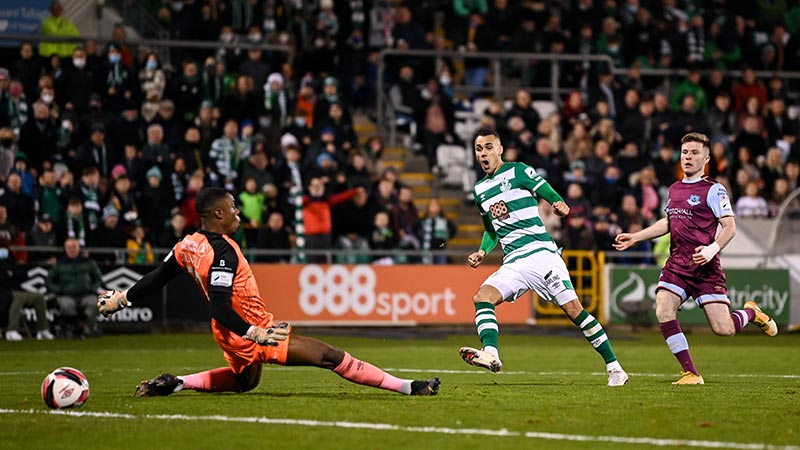 Second half goals by Graham Burke helped give Shamrock Rovers all three points, as he struck just right at the death to snatch a win, as they overcame Drogheda 2-1.

The champions are celebrating after their success tonight, but were made hard to work by the Drogs, a penalty by Mark Doyle had them ahead just before half time, but Burke came up again for his side to not spoil their title party.

A worthy title win in truth for the Hoops, they showed true grit as they battled from 1-0 down to take all three points.

The game brings the curtain down on the career of Joey O’Brien as the veteran defenders retires for pastures new, while Jack Byrne returns having been introduced to the fans before kick off, a boost ahead of the 2022 season.

The opening half provided very little in the way of action, it took until the 38th minute for the first major chance, Burke firing a great shot on goal but David Odumosu saved well to deny him. Just seconds later the visitors had a chance at the other end, Mark Doyle cutting in the by-line with his effort on goal beating Alan Mannus but going wide.

Just before the break the Claret and Blue Army looked to spoil the party, as Sean Hoare was penalised for a foul inside the area, as the referee pointed to the spot, contact looked minimal but the Rovers defender still saw yellow. Doyle stepped up to send Mannus the wrong way to see them 1-0 ahead at the break.

Just four minutes after the restart, Burke finished a fantastic attacking play to race in behind the Drogheda defence, and finished well past the onrushing Odumosu to tie the contest.

Rovers could have added to the lead after the hour mark, Joe Redmond with an amazing goal bound clearance to deny Danny Mandroiu, as it looked like a certain goal, the prolific forward lethal in the area.

It looked like the points would be shared by the clubs, but in the end Burke popped up to seal the win, a training ground routine from a corner allowed Burke to rise high, and finish with a powerful header into the back of the net.