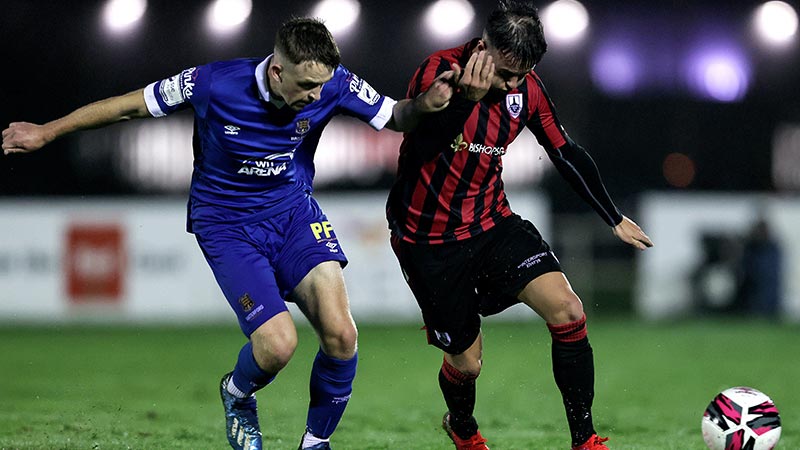 A 75th minute penalty from Dean Williams earned Longford Town a 1-1 draw at home to Waterford on a misty night at Bishopsgate.

Waterford had taken the lead on 65 minute when Anthony Wordsworth scored a stunning goal. It was no more than the visitors deserved but 10 minutes later Darragh Nugent played a lovely ball into Williams but he was taken down by Eddie Nolan. Williams made no mistake with the spot-kick.

In what was a poor opening half chances were at a premium with neither keeper having to make a real save of note. The visitors bossed possession with Niall O’Keeffe, John Martin and Shane Griffin having chances. Dean Williams and Aaron Robinson with the chances in that half for the home side.

The visitors finished with 10 men after Halford was sent off for Waterford in the 86th minute on a second yellow.

Williams’ 75th minute penalty earned Town a draw in their final home game of the season.

Waterford are level on points with Finn Harps but stay in ninth due to an inferior goal difference. They finished the game with 10 men after defender Greg Halford received a second yellow card from referee Ray Matthews.

In what was a poor first half chances were at a premium. Williams shot straight at Murphy in the third minute while the visitors’ first chance on goal came in the ninth minute but Niall O’Keeffe should’ve done better with his effort.

As the half went on the Blues enjoyed a lot of possession but rarely made Town keeper Lee Steacy work. John Martin (Waterford) and Aaron Robinson (Town) both had chances from headers that were wide of the target. In the 38th minute Shane Griffin shot over as Town failed to clear a Waterford corner.

The second half was a lot better than the first as both sides upped their performances. Just like the first half Williams had the first effort after the break but Murphy again saved. In the 59th minute Town keeper Steacy brought off a fine save to deny Eddie Nolan.

The deadlock was eventually broken in the 65th minute when Wordsworth hit a stunning strike through a crowded area to give the visitors the lead. 10 minutes later and Town were back on level terms when Williams made no mistake from the penalty spot.

Things got worse for the visitors on 86 minutes when Greg Halford was sent off after picking up a needless second yellow card. The Town defence stood firm as Waterford went in search of a second goal. The battle to avoid finishing in the relegation play-off spot goes down to the final league game of the season.