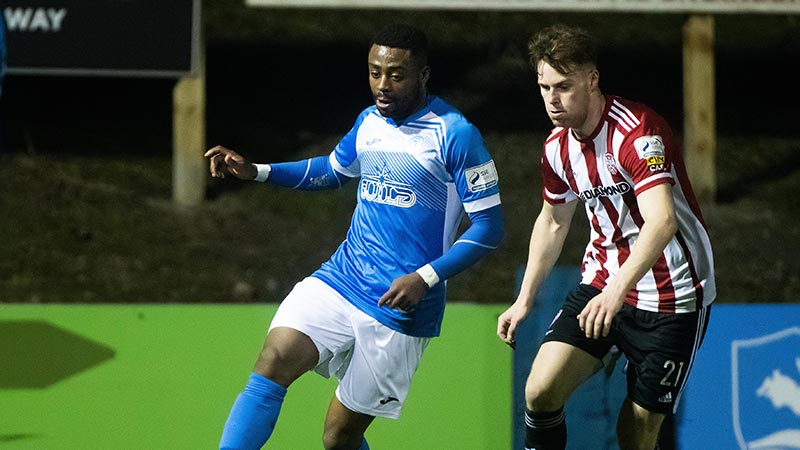 The North West derby, finished all square at Finn Park, a 1-1 stalemate between Finn Harps and Derry City, the result sees Harps climb out of the relegation zone, as Waterford suffered a defeat at home.

A game of few chances on a typical wet Donegal night, the game kicked into action in the last five minutes, both teams found the net as Ethan Boyle sent a header into the net, while Jamie McGonigle put home a penalty, to snatch a point for the Candystripes.

It was a game with very few chances, but the final few minutes were entertaining and the atmosphere, inside the ground was electric as both sides pushed for the late winner, but that never came for both teams.

Harps started stronger with two chances in the opening 10 minutes, Tunde Owolabi broke through down the right, but fired into the side netting in the second minute, while Ethan Boyle let fly with a rocket, from outside the box but Nathan Gartside saved well, on the nine minute mark.

It remained with the Donegal outfit on top by the 15th minute, another half chance for Harps, Will Seymore played along ball to find Owolabi, whose shot takes a deflection and was gathered by Gartside, it remained deadlocked for the finish of the half, as Ollie Horgan's men looked dangerous.

The intensity levels rose in the second half, the tackles started to fly in and the cards were being shown, as neither side were giving an inch in a frantic opening few minutes, but both failed to create a chance in front of goal.

It took until the 84th minute for the deadlock to be broken, a free kick just outside the Derry area by Ryan Connolly, was floated into the danger zone, and Ethan Boyle ascended into the heavens, to fire a header into the back of the net.

Just as it looked like the Ballybofey men would park the bus, the referee pointed to the penalty spot for a handball, much to the dismay of the home players and supporters, substitute Jamie McGonigle stepped up and sent Mark McGinley the wrong way, to rescue a point in the 86th minute.