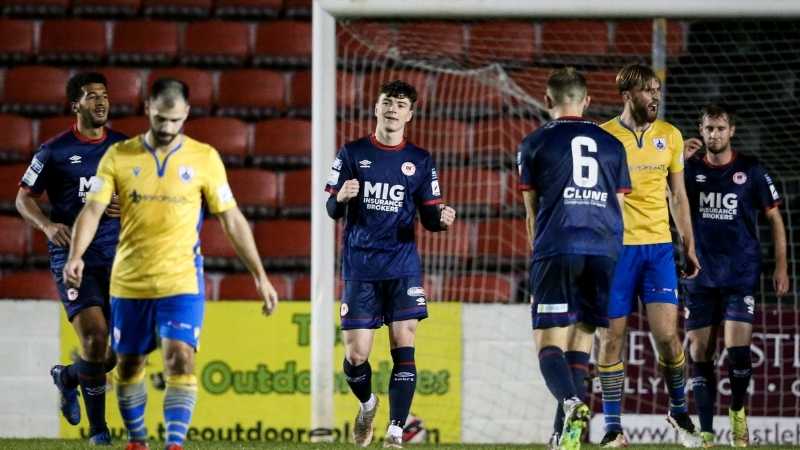 Matty Smith’s first half brace put the visitors in the driving seat, with two neat finishes from close range.

The hosts improved in the second half and inflicted serious pressure, including Dean Williams’ solo effort.

But Alfie Lewis’ brilliant finish put the game to bed late on, before Smith sealed his hat-trick in injury time.

The hosts started the match well and were denied an opening goal by St Pat’s goalkeeper Vitezslav Jaros’ saves.

Rob Manley was denied twice from close range and Dean Williams’ header was saved by the brilliance of Jaros.

But the visitors took the lead after half an hour through Smith.

The striker volleyed home from close range, leaving Lee Steacy rooted to the spot after a wonderful dribble by Chris Forrester and a clever lofted through ball.

At the other end, Manley was denied a penalty as he seemed to have been brought down from behind when through on goal, but the referee wasn’t interested.

On the stroke of half time, St Pat’s doubled their lead through Robbie Benson’s corner catching out Lee Steacy, and Smith was there to head in from close range at the near post.

The visitors started the second half well and were given a boost, when they halved the deficit through Dean Williams’ brilliant solo effort and cool and composed finish.

But the game was put to bed, five minutes from time through Lewis’ brilliant effort after good play by Darragh Burns and Smith set the substitute up for St Pat’s’ third.

The icing was put on the cake, as Smith sealed his hat-trick in injury time, after Burns very unselfishly played the ball across the face of goal for Smith to tap into an empty net.