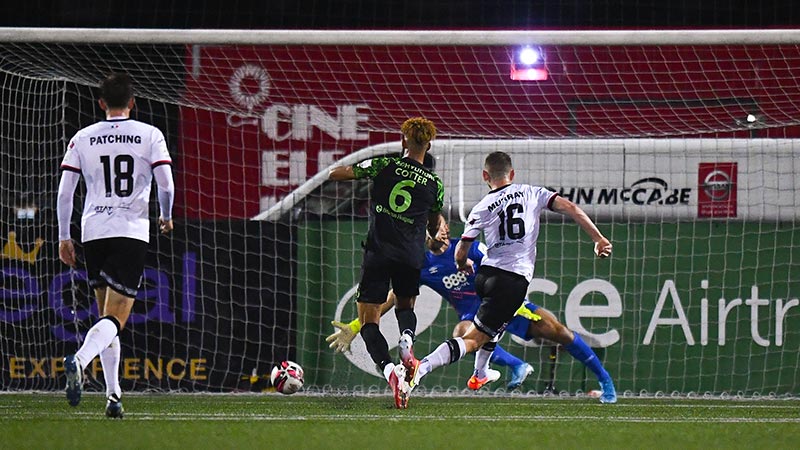 A performance that was both persevering and tireless Dundalk have left a mark on the second half of their season as they claimed an important victory over Shamrock Rovers.

A solitary goal by Sean Murray midway through the first half was the pivotal moment that showed that taking the one chance presented is what is the key to winning games such as this. Shamrock Rovers while impressive in possession squandered chances aplenty but were denied a certain goal courtesy of a fantastic save by Peter Cherrie.

This was a game that was tense from the off, with both sides not letting an inch to spare on Oriel Park.

Shamrock Rovers almost grabbed an early opener as Richie Towell latched onto Ronan Greene's pass but it flashed wide of the mark. The clubs continued to carve out chances but the home support went into raptures thanks to a fantastic team goal from Murray.

Michael Duffy and Pat Hoban linked up on the left hand and Hoban with the clever of passes found Murray who as cool as you like slotted it past Mannus to open the scoring. The away side continued to press and Dundalk pinned back threw bodies on the line to deny Richie Towell on two occasions to equalise.

The key turning point in the game came when Dylan Watts right on the stroke of halftime was denied by Cherrie as the veteran shot-stopper tipped the ball around the post with a fantastic save.

The second half while high in tension was low on clear chances, Rory Gaffney collected the ball on the edge of the area however it went high over the bar. Dundalk in rare attacks the home side broke quickly with Murray, Stanton and Dummingan linking up but Dummigan's cross was put over for a corner. As the game reached its end Sami Ben Amar found himself on the edge of the area with Mannus at his mercy but his effort went high over the bar.

The scenes at the end of the game show the passion and endeavour of this Dundalk side are there for all to see but it won't change that Rovers will be champions come seasons end, this only prolongs the inevitable.