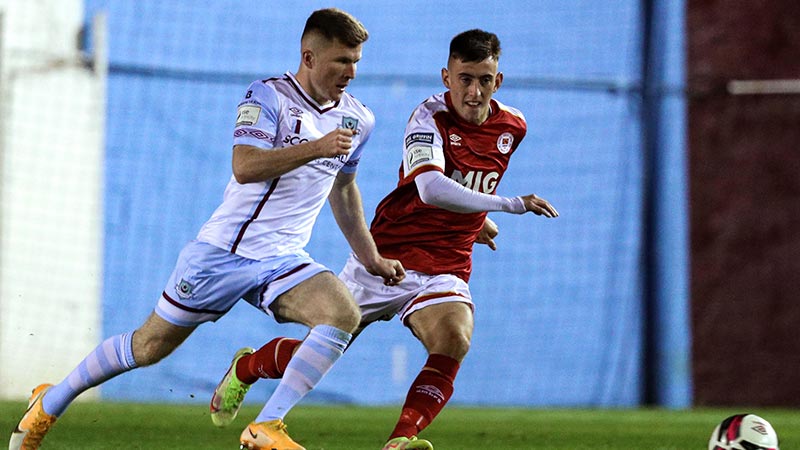 An Alfie Lewis late thunderbolt was the difference at Head in the Game Park this evening as Drogheda United lost in the last seconds to St Patrick’s Athletic 0-1.

Chances were few and far between in the first half, as Chris Forrester’s off target shot was the peak of the excitement for either set of fans.

With the game in its dying embers, and not a lot of improvement from either side in the second-half, there needed to be a moment of quality. That came as Lewis put his foot through the ball and found the top corner.

Drogs started the match pressing high and hard, looking to restrict Pats time and space on the ball. This created a frantic game in which neither side could really create an opening. The away side progressed the ball forward slowly and often had to result to a long ball or backwards pass.

When Saints wingers tried to take control of proceedings a couple of with pacy runs, the first-half’s only chance of any note was created. Chris Forrester dragged his low shot wide, not testing the Drogs ‘keeper.

A great deal of improvement was needed in the final third for both sides heading into the second-half.

That improvement wasn’t forthcoming throughout the majority of the next 45. Ronan Coughlan had the best of the chances. The forward met the cross of Darragh Burns, but could only direct his header tamely at the ‘keeper.

The Claret and Blue Army attempted to hassle and harry Pats, and created one or two promising situations. One such situation saw Killian Phillips whips a right-footed shot just past the upright.

The game looked destined for a draw, with both sides huffing and puffing in attack all night long. However, Lewis, who had been pulling the strings for the Saints, had other ideas. The busy Ben McCormack played him in on the edge of the area, and Lewis gave it everything, the ‘keeper was helpless and Pats snatched all three points.

This can give confidence to St Pat’s going forward for the European ambitions, but it’s a big kick in the teeth for Tim Clancy and Drogheda, who’s poor form continues.