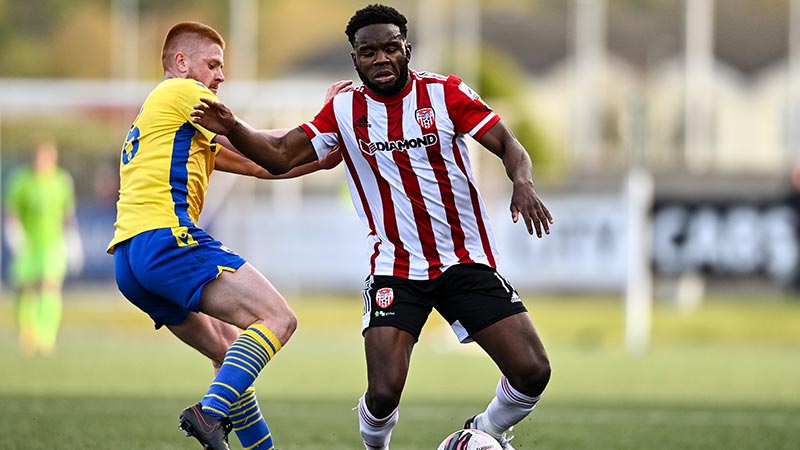 First-half goals from Jamie McGonigle and James Akintunde as well as a Junior goal on 81 minutes was enough for The Candystripes to claim all three points.

Two fortunate first half goals from Jamie McGonigle and James Akintunde set the pace of the game as Longford desperately tried to get into the game.

McGonigle who pressured the Longford defence got lucky as the ball bounced into his path from a poor clearance allowing him one-on-one with Lee Stacey in the Longford net, The Dungiven man made no mistake and slotted it past Stacey just after the quarter hour mark.

Longford went in search of an equaliser opening up the game for Derry's counter-attacking game to come into play when on the half hour mark Akintudes strike from 22 yards took a wicked deflection and rattling Staceys net as there was nothing the Dubliner could do to prevent it.

Again Longford went in search of a way back into the game with Dean Byrne, Aodh Dervin and Dylan Grimes making a nuisance of themselves, while Stacey was forced to make a number of saves to deny City.

Longford started the second half strong with Nugent rounding Gartside only to put the ball over the bar as he lost his balance which epitomised Da Towns night.

Moments later, at the other end Stacey pulled off a remarkable save to deny Junior to keep his side in the game.

The game ebbed and flowed from that point with neither side creating and clear cut chances. With both clubs making a host of changes trying to make something of the second half.

With 10 minutes to play Danny Laffery latched on to a precision long ball, Stacey pulling off an acrobatic save only far the ball to land at the feet of star man Junior whose miskicked shot bounced of the ground and evaded the scrambling Longford Keeper.

Ruairdhi Higgins emptied his bench giving a debut to new boy Gerard Storey and adding fresh legs to his side to see out the game.

Longford ended the match strong and had calls for a penalty denied by Roscommon referee John McLoughlin in the dying moments.

Next up for Derry is a trip to Tallaght to face the last side to beat them in a league game, top boys Shamrock Rovers on Friday night. Longford on the other hand wait until Saturday host an inconsistent Bohemians side at Bishopsgate.