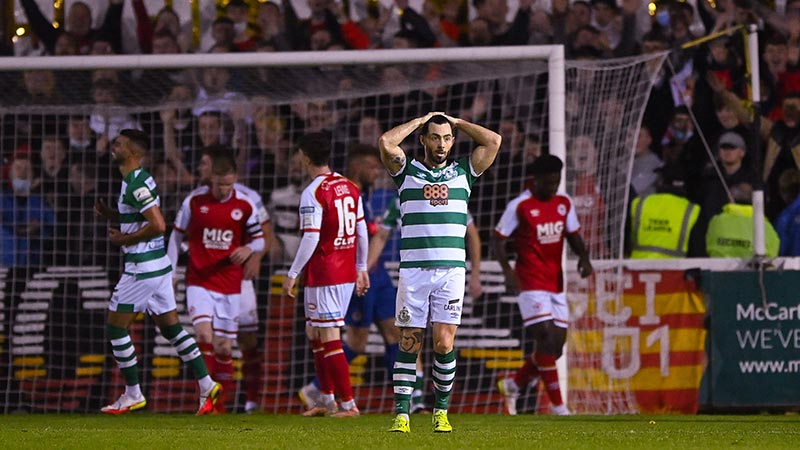 Nahum Melvin-Lambert’s 93rd minute own goal has all but gifted the title to Shamrock Rovers as the defending champions saw off title rivals St Patrick’s Athletic 1-0.

It was a game of very few chances, with both sides looking too scared to lose rather than going all out for the win.

But Rovers’ win tonight increases the gap to nine points between the top two sides, with the league leaders also having a game in hand.

A big crowd was in attendance as over 2,500 fans were crammed into Richmond Park – its largest crowd since February 2020.

The aggression and intensity were there from both sides but the lack of quality in the final third was surprisingly missing from two teams with generally such potent attacks.

In the second half, Chris Forrester was picked out in the box by a great Sam Bone cross, but the attacker’s free header went wide, from just three yards out.

In a game of few chances, St Pat’s fans knew deep down that they would rue that miss as the predictable Rovers attacking storm came.

Former St Pats striker Aaron Greene went through one on one, but his shot was straight at Vitezslav Jaros.

Jaros was called into action once more in the 89th minute as he made an emphatic double save to deny substitute Ben McCormack.

But Rovers broke the deadlock in stoppage time after Dylan Watts’ free kick from the left was flicked into his own net by substitute Melvin-Lambert.

An unfortunate error but one that will likely see the title remain in Dublin for another year.

Next up for the champions elect is a home game against Derry City next Friday, kicking off at 8pm.

Whereas, second place St Pats are also in action next Friday, away to Drogheda United, with a 7:45pm start.