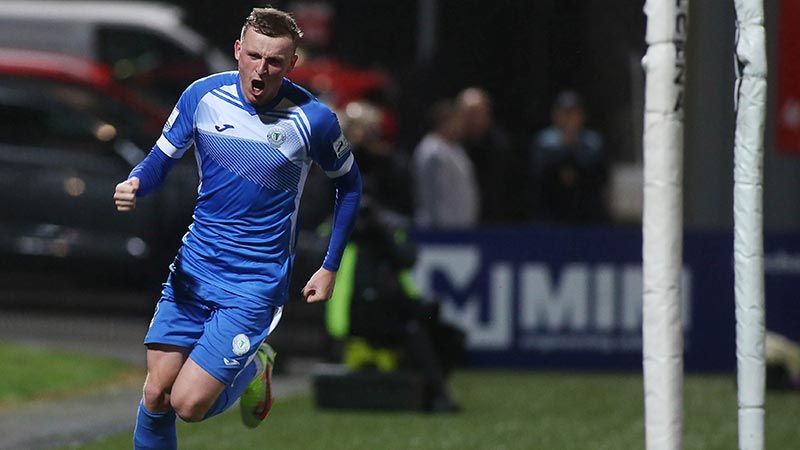 The 90th minute of this Northwest derby between Derry City and Finn Harps saw a royal rumble ensue with a late equaliser from Joe Thomson, resulting in two red cards and midfielder Johnny Dunleavy taking the goalkeeper gloves.

2-2 score upon conclusion in the 97th minute, both sides scored a brace in each half to earn a share of the spoils in the Brandywell.

Sending offs for goal scorer Thomson and keeper Nathan Gartside meant an exciting showdown and put some stunning goals earlier in the match into distant memory.

Junior Ogedi-Uzokwe’s salmon embodiment 18 minutes in yielded the first mark on the card of the fixture, but Jordan Mustoe’s net that came across the face of the home side’s area just before half-time was amongst the greatest site to behold tonight between the rivals.

A close second was that of Ryan Rainey’s strike which he slotted away with class, Will Seymore to thank for splitting down the right wing and picking out the 24 year old on the hour mark.

Time wasting and game playing on the Donegal club’s part then reared its’ head, something which came back to bite them upon the referee’s final whistle.

It looked as if Harps were going to run home with the three points and inflict Derry their second successive loss against them approaching the end of the match, but Thompson insisted on a different outlook when he smashed the ball into the roof of the Ballybofey squads net to undo their impressive defensive work.

All chaos broke loose with the fireworks that followed but what is for certain is that neither team nor fans will be forgetting this one in a hurry despite the tied result.

Ollie Horgan’s group now go within one point of Bohemians and sixth place, while Drogheda close in on City who just about retain their fourth spot with the outcome tonight.

All that is to say things are continuing to heat up in the SSE Airtricity League Premier Division, and also that the old saying rings true that a contest is never over until it’s over.