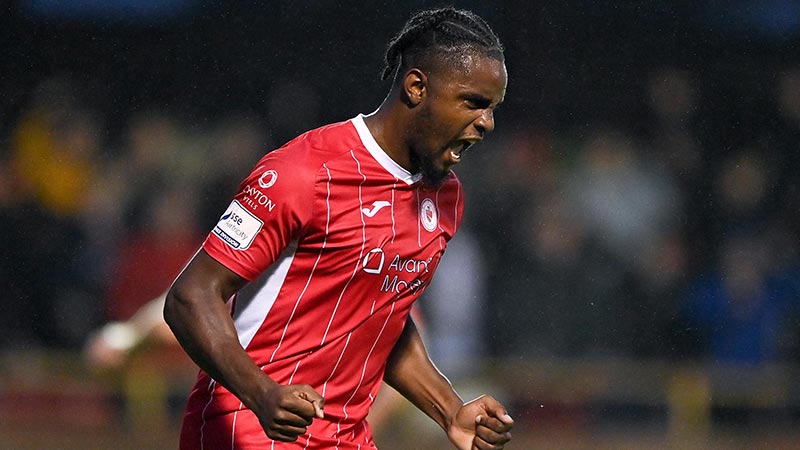 A second half Lewis Banks header, was enough to give Sligo Rovers all three points, as they overcame Dundalk 2-1, in tonight’s SSE Airtricity League meeting at the Showgrounds.

Both sides found the net within 60 seconds of each other, Patrick Hoban on hand to put home a very scrappy opener for his side, before Andre Wright headed home from a Sligo corner to equalise.

It was Banks who got the winner in the 52nd minute, Greg Bolger sending in a free kick, with Banks looping a header over Alessio Abibi.

Tonight’s win sees Sligo sit just five points behind St. Pats, the home side remain in third as they look comfortable to remain in that spot until the end of the season.

The Bit O'Red had an early chance to go in front, Adam McDonnell striking a free kick, which just managed to go over the crossbar. Greg Sloggett got on the end of a Michael Duffy lay off but his shot flew over the bar.

Dundalk found the breakthrough in the 18th minute, a dictionary definition of a goalmouth scramble, as Patrico Hoban managed to flick on a goal bound strike by Will Patching, into the back of the Sligo goal.

Just seconds later the home side drew level, Andre Wright getting his first goal for the club, as he was on hand at the back post, to fire home after a short corner was taken quickly, with the ball managing to find its way to Wright at the back post.

With both teams all square at the break, the opening of the second half was a tight affair, Hoban managing the first major chance for his side, he got up well to meet a cross but his downward header was gathered safely by Ed McGinty in the Sligo goal.

The match winner came from the head of Lewis Banks, Greg Bolger sending a dangerous ball in from a free-kick, Banks running into the header, before sending a looping header over Abibi who couldn't keep it out. Their first back to back league win since June, as Dundalk suffer their 12th defeat of the season.