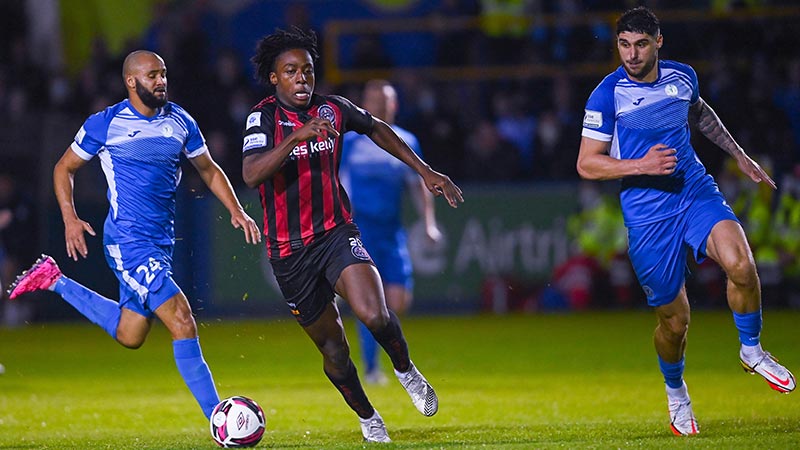 Two first half goals from Promise Omochere and Georgie Kelly, from the penalty spot; for Bohemians were enough for the Dublin side to take all three points against Finn Harps in a wet Ballybofey.

Ryan Rainey's 80th minute goal for Harps was not enough, in a game marred by multiple injuries.

Both teams started well with a number of attacks in the opening quarter hour, Dawson Devoy and Ali Coote hassling the Harps defence while Will Seymore, and former Shamrock Rovers pair Sean Boyd and Ethan Boyle coming close for the home side.

It wasn’t until Ali Coote picked up an injury in the 17th minute and was soon after replaced by Promise Omochere when there was finally some real danger in either box, The pacey midfielder giving a lift to both sides.

It wasn’t long before the intense work rate of Promise paid off, as the ball Ping ponged around the Harps box Georgie Kelly found him with a header, Promise himself flicked the ball past Ger Doherty in the goal. Calls for offside went unheard as referee Paul McLoughlin spotted the downed Will Seymore who played the goal scorer onside. This happened to be Seymore's last action as he was also subbed off due to injury,

Bohs gained control of the game after the opener with Ross Tierney driving into the box with five minutes to play in the first half, Kosovar Sadiki clashing with the midfielder and conceding a penalty for his troubles. Donegal native, Georgie Kelly stepped up and expectedly smashes the back of the net.

The half almost petered out without incident until versatile Johnny Dunleavey, made a challenge on promise to stop an attack, however the hometown star came off the worse, leaving the field in the third minute of added time with his arm in a sling.

After the break both sides struggled to get a foothold on the game with few chances coming and nothing to trouble either goalkeeper, Rainey on 66 and Promise in the 72nd minute being the best of the chances, the Dublin sides midfielder catching Doherty with a stray boot and picking up a yellow for his efforts while the former hit the side netting.

It was in fact Rainey who ensured a nervy ending for The Gypsies as he latched onto a Webster cross beating Irish International Talbot with 10 minutes remaining.

Calls for a goal came in added time as Harps fans and players alike felt the ball crossed Talbot's line but neither the referee nor linesman were convinced.

A dramatic ending in Ballybofey was always on the cards as Bohemians raced forward in search of a third but Karl O’Sullivan ensured there would be no grandstand ending pulling down the attacker on the halfway line.

Next up for hard as they entertain Dundalk in the FAI Cup next weekend before they make the trip to Dalymount to test Bohemians once again in the League, Bohemians host Maynooth University in the FAI Cup and Derry City in the league prior to that meeting as they catch up on postponed games due to their extended run in the Europa Conference League.