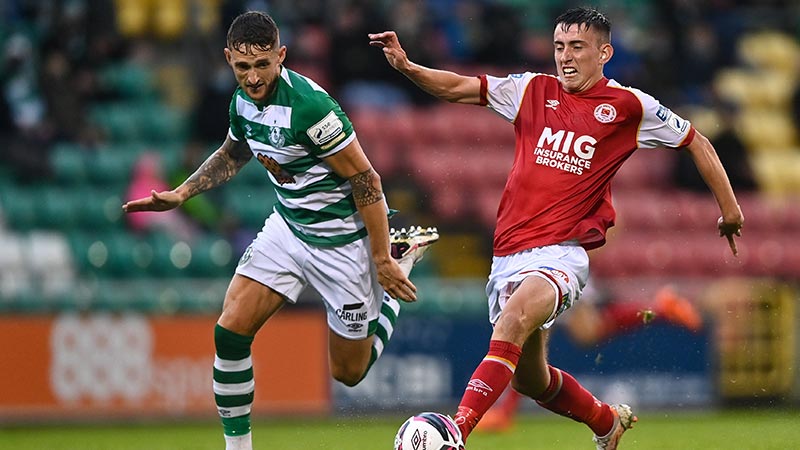 A brace of goals from man of the match Danny Mandriou and a clinical header from Roberto Lopes ensured that Shamrock Rovers lead at the top of the table intact as they overcame a resolute St. Patricks Athletic in Tallaght tonight.

The league leaders took the lead thanks to a clinical finish from Mandriou only for the Saints to pull one back courtesy of a John Mountney free-kick.

Any indication of Stephen O’Donnells going back to Inchicore with the full points was dashed with second-half goals from Roberto Lopes and Mandriou adding a second to his tally.

Athletic made most of the early running as they deployed a strong midfield set up with Robbie Benson taking on the role as a ‘false nine’ as O’Donnell looked to take it to the hosts.

The first chance of note fell to the visitors as a cross from Paddy Barrett was almost met by Billy King at the back post but the ball evaded him at the vital moment. It was the hosts who took the lead as a defence-splitting pass from Dylan Watts saw the ball fed to Mandriou who slotted his effort home with a well-placed strike.

Rovers continued to press for a second and the Hoops had a series of chances with Richie Towell and Ronan Finn going close however it was St. Pats who would get an equaliser right on the stroke of halftime.

John Mountney, known for his set-piece prowess; struck a low hard free-kick that took the slightest of touches off Watts en-route to goal that left Alan Mannus flat-footed and powerless to stop it. Game on.

Shamrock Rovers took the game to the visitors from the restart and Rory Gaffney had an early opportunity to put the Hoops back in the lead however Sam Bone made a crucial block in the goal area. They did however restore their lead on the hour mark as a Watts corner was met at the near post by Roberto Lopes and his header gave Jaros no chance.

Darragh Burns went close to equalising as he broke down the right and cut inside his curling effort did go wide but it left Mannus racing to cover his far post.

The next attack for the hosts all but sealed the tie for Rovers as Watts was once again instrumental as he set a through ball to Mandriou who chipped the ball over the advancing Jaros to get his second of the game.

While St. Pats continued to attack it was all in vain as Shamrock Rovers cement their place at the top with a busy week in Europe awaiting them.