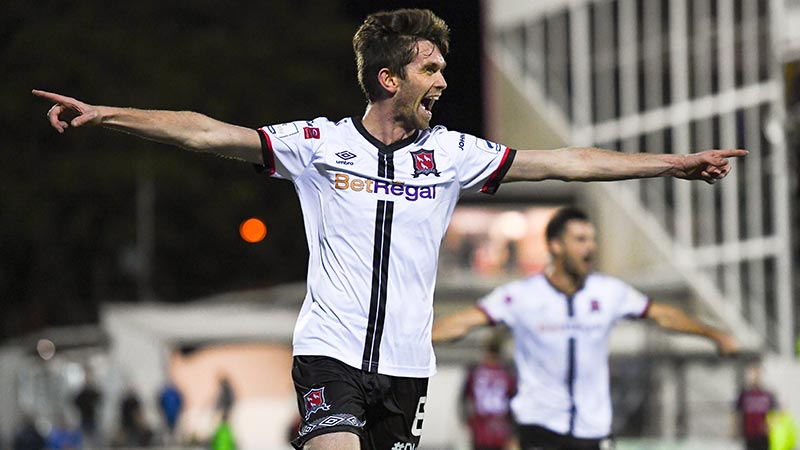 Dundalk’s recent upturn in good fortunes continued tonight as Sam Stanton’s wonder-strike and another fantastic effort from Patrick Hoban gave the Lilywhites their third win on the bounce as Keith Long’s side suffered their second league defeat in a row.

This was an exciting game that was end-to-end for much of the tie, before Stanton's wonder goal gave Dundalk the perfect ending to the first half and Hoban led by example with another captains goal in the second period.

Tyreke Wilson restored some parity to the game with a well-taken effort but Dundalk stood firm for the three points.

The opening exchanges showed the intent that each team was in search of the vital three points on offer. The first shot on goal fell to Dundalk with former Bohs player Darragh Leahy letting one fly from the edge of the area but it just went wide. Georgie Kelly looking threatening against his old employer testing Peter Cherrie in aerial duos but the Dundalk keeper always meeting his match.

The best of the chances for both sides before the opening goal saw Sean Murray's header cannon off the post leaving Talbot for dead and for the away side Keith Buckley took the ball off Greg Sloggett and raced forward but his long-range effort was well saved by Cherrie.

The opening goal came just on the stroke of half-time as Stanton received the ball in the area at an extremely tight angle he struck a fantastic effort that flew past Tablot who had no chance.

The second half did not let up in terms of excitement and incident as both sides had goals to celebrate as the tie came to a tense conclusion.

It seemed Dundalk were in pole position for the points as from a corner, Hoban got the ball on the edge of the area and he hits a fantastic curling effort past Talbot to put Dundalk two goals to the good. Bohemians continued to move forward and test the Dundalk defence and Tyreke Wilson struck a well-placed effort that beat Cherrie at this near post.

Both clubs had chances to add another with Dundalk having to rely on some excellent goalkeeping and some stellar defending from Andy Boyle to thwart Georgie Kelly at every turn. The hosts had an opportunity to add a third when Pat Hoban's first time effort just whistled past the post.

Bohemians, despite getting a second wind could not make the ample possession count, as the Lilywhites showed grit and determination to see this out.