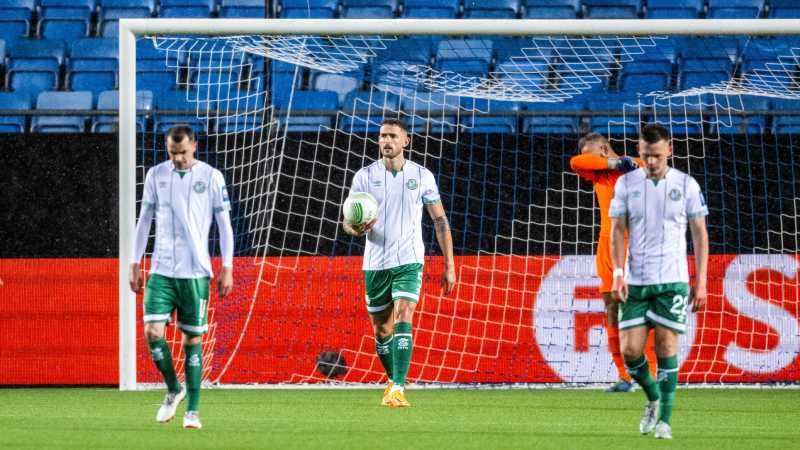 A disappointing Shamrock Rovers were brushed aside in the Europa Conference League as Norwegian League leaders, Molde, cruised past them 3-0.

This was a meeting of two teams atop of their respective domestic leagues yet there was only ever one side who were going to win this match.

Molde dominated from start to finish & Rovers can count themselves fortunate that the scoreline was only 3-0 by the end.

The floodgates opened ten minutes in when Kristian Eriksen’s teasing delivery went untouched by a static Rovers backline. It fell to Molde’s inform man, Ola Brynhidsen tucking it into the corner.

Molde penned their visitors in & had chances to extend the lead. Eriksen drove a volley just wide whilst Alan Mannus, perhaps the only Rovers player to emerge with credit, did brilliantly to prevent an Andy Lyons’ own goal.

Having somehow reached the interval trailing by just one goal, there was cautious hope that Rovers could rejig & attack a bit more to get a result.

Such hopes were immediately quashed by Molde as Brynhidsen scored his second. Again, it was poor defending by a predatory finish as a cross was unattended to & Brynhidsen powered above Ronan Finn to give the scoreline a more accurate reflection.

Just before the hour, Molde got the third strike that their play merited. This came with a large slice of luck as a cross deflected off of Lyons, struck the post & with nobody near him, home midfielder Etzaz Hussain, gleefully nodded in.

Whilst Rory Gaffney offered some long overdue attacking impetus when he came on, it was too little too late for Rovers. Their night best surmised by Neil Farrugia’s utterly pointless booking for a petty foul late on.

Not the start to a big week of matches that Stephen Bradley will have wanted. Shelbourne at Tallaght are up next before Molde are in town next Thursday. For their pride, if nothing else, a far better performance is required.