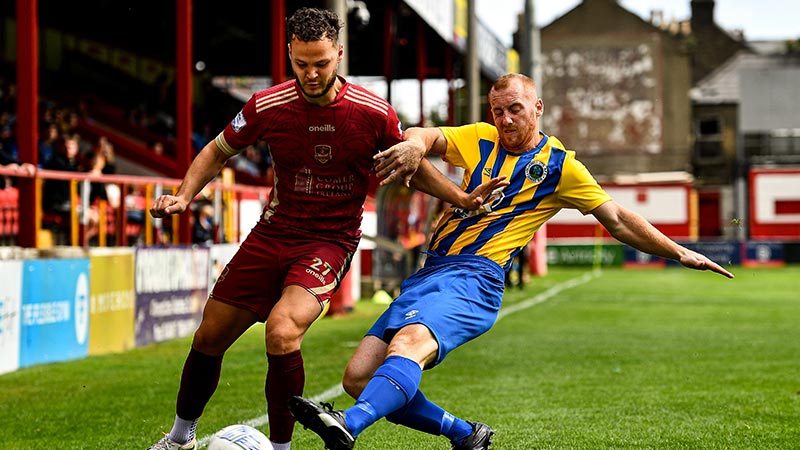 Galway United progressed to the second round of the FAI Cup as they overcame a battling, ten-man Bluebell United 7-0 at Tolka Park.

Tolka Park was the venue for this Cup tie and the first half saw plenty of incident. Galway went ahead when Nathan Bell dragged back Stephen Walsh in the box, David Hurley unerringly converted the penalty kick.

Minutes later, home striker Shane Stritch was red carded for a recklessly mistimed tackle on visiting captain Conor McCormack. This galvanised Bluebell who pushed hard for a leveller, left-back Leon Hayes was a particular threat with his set pieces.

However, Walsh bagged a quickfire brace of supreme quality to take the game away from the non-league side. He first powerfully headed Oisin O’Reilly’s pinpoint delivery into the corner before he finished a surging run stylishly, firing the ball into the net.

Robert Manley was next to score after Bastien Hery, on his Galway debut after signing from Finn Harps, sumptuously sidestepped a defender to slip in the unopposed Manley who made it 4-0.

Local lad David Tarmey had a dream cameo off the bench, the youngster full of running and got his rewards with a close-range tap in from O’Reilly’s fizzed centre.

Yet it would be another substitute who would steal the headlines as Francely Lomboto fired home on the counterattack after Hurley played him through. Lomboto pounced late on in injury time to score his second after defensive miscommunication.

Despite the battering, Bluebell had Galway on the ropes before Walsh’s quality brace drained them. Glenn McCauley was a pest up front, and the defence were regularly heroic in the second half with their determination to block.

For Galway, John Caulfield will be delighted that his side navigated smoothly past this potential banana skin of a cup tie and they will be watching Tuesday’s second-round draw with keen interest.