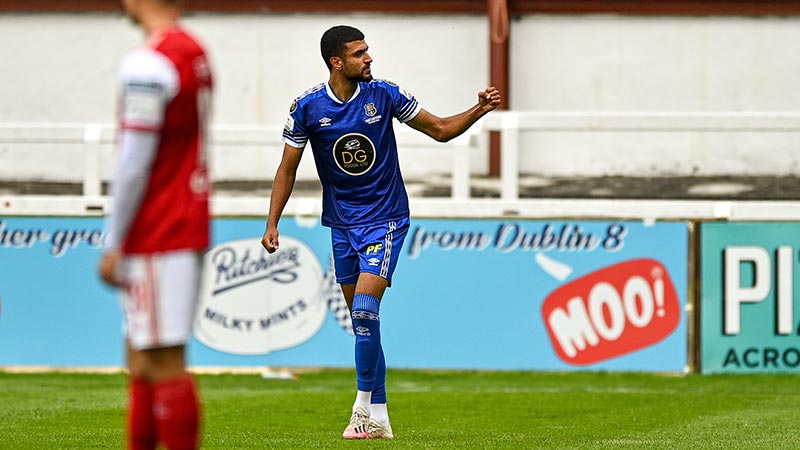 This game began with a ding-dong battle as Phoenix Patterson opened the scoring for Waterford in the 12th minute. Phoenix Patterson did well on the right wing places a good pass into Aouachria in the penalty area to finish.

However, Pats replied within 5 minutes. A cutting pass from Atakayi split the Waterford defence and Sobowale took down Coughlan, who stepped up to finish the penalty. Pats went ahead through a Grivosti header before a Waterford resurgence took control of the game.

In the 33rd minute, Aouachria punished a defensive mistake to pounce for an equaliser. Under little pressure, Serge Atakayi played the ball back to his centre back who was not on his wavelength and Aouachria runs in and finishes the ball to the back of the net for Waterford. Waterford continued to press and St.Pats were living on the edge. Just three minutes before half-time, Quick feet from Waterford’s Junior, who played a one-two with Patterson to create space. He smashed a rocket from 25 yards to fly past Anang.

Chris Forrester’s introduction immediately improved the home attack , he created danger down the left wing and a chance for King early in the second half. Pats continued to threaten, Breslin whipped in a great cross which Coughlan headed wide. King and Coughlan combined well only for King to shoot over the bar. As Pat’s continued to press with time ticking away, Mark Doyle ran down the channel and shot across goal but wide. Paul Martin pulled off a massive save with minutes remaining. Waterford went on the attack straight after, Idowu with a driving run towards the Pats goal but couldn’t find the target from a tight angle.

However, Despite throwing everything at the First Division visitors St. Pats couldn’t find an equaliser and the cup holders are eliminated in the first round of the FAI Senior Cup. Waterford move on with confidence after coming from behind to win away in the Capital.