Drogheda made light work of Athlone in FAI Cup 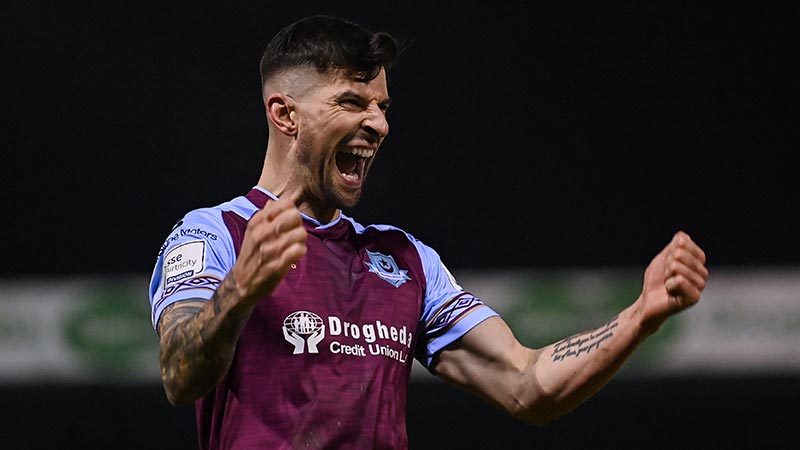 Drogheda United cruised to a 5-0 victory over Athlone Town at Head in the Game Park, advancing past the First Round of the FAI Cup.

Adam Foley’s flicked header in the sixth minute set the tone for Drogheda’s domination before Vladislav Velikin gifted Dean Williams a tap-in on 40 minutes. Right before the break Darragh Markey added with a shot from just inside the area.

A second Velikin howler meant for a second Williams tap-in for the fourth, while Ryan Brennan added the fifth with a header 67 minutes in.

A professional cup performance from the Drogs, but equally one they looked to really enjoy as they dispatched of Gordon Brett’s side. A strong line-up from Kevin Doherty that fired on all cylinders meant the travelling team were never in contention.

It took just six minutes for the deadlock to be broken, as Gary Deegan’s cross met Foley who smartly flicked a header over Velikin and into the net. Drogheda began to knock the ball around and the feeling of enjoyment of being in that unusual situation was apparent in their body language as they took risks and shot from range.

Athlone had nothing to offer other than hopeful runs from Shane Barnes down the channels, however defensively, they kept the hosts out well until their second on 40 minutes. That is why the nature of this goal meant added frustration for the Westmeath side, as Velikin gifted Williams a spot on the scoresheet.

In a carbon copy of the Dion Dublin Shay Given moment from 1997, Williams snuck from behind Velikin to poach the ball and tap home. Markey made it a foregone conclusion right before the interval, taking in a fizzed ball from Andy Quinn, dropping the shoulder, and burying home for 3-0.

The second-half was a similar story and with 55 minutes on the clock Velikin came to the fore again, for all the wrong reasons. His failed clearance hit Markey who found Williams, and Williams once again found the empty net at his mercy in making it 4-0.

Substitute Brennan chipped in with his usual contribution, stooping low to head home a brilliant Dayle Rooney cross with 67 minutes played. Athlone were out of sorts while Chris Lyon’s and Markey threatened a sixth with audacious attempts.

Matthew McCarrick’s introduction was the source of a bright spark for The Town, and it would also be the source of their consolation goal in the 84th minute. McCabe unnecessarily left his goal and McCarrick was able to roll the ball home from way out to leave things at 5-1.