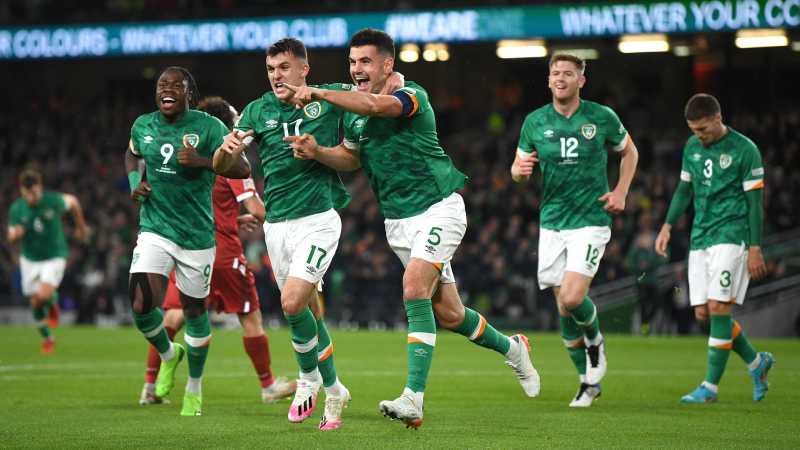 The Republic of Ireland avoided a late scare after Robbie Brady’s late penalty secured a 3-2 victory over Armenia in the UEFA Nations League.

John Egan and Michael Obafemi looked to seal this one, but Artek Dashyan and Eduard Spertsyan had other ideas. However, a late handball by Dashyan allowed Brady to rescue the three points in injury time.

Ireland looked as if they were carrying over the good play from the Scotland game early on and had some decent half chances. It took less than eighteen minutes for it to come to fruition.

After a Jason Knight shot was blocked, Brady took an in-swinging corner. Egan met it and headed right into the net, earning his second goal in as many games.

The hosts continued to play well for the rest of the half and although Armenia came into it somewhat, nothing came of some decent late first-half play. Ireland meanwhile continued the good play after the interval and it paid off.

In the 52nd minute, Darragh O’Shea picked up a loose ball and played a lovely pass to the feet of Michael Obafemi. The Swansea man turned and took a shot outside the box, finding the bottom corner for his second goal of the campaign. Ireland were prepared to ride it out, but the visitors had other ideas.

In the 71st minute, Vahan Bichakyan got the ball on the right of the Ireland area and curled it goalwards. Gavin Bazunu tipped it onto the post but the rebound fell to Artek Dashyan, who buried it to set about some nerves.

It got worse only a minute later when Conor Hourihane played an absolute hospital ball just outside the area and Eduard Spertsyan tried his luck with it. His effort beat Bazunu and was really one the Southampton shot-stopper should’ve saved. All of a sudden, Ireland seemed shell-shocked.

The day was rescued when in the 86th minute a Brady corner was met by Collins, whose header was blocked by Dashyan. The incident went to a lengthy VAR check and the penalty was given.

Robbie Brady stepped up and slotted it in to save the day. Ireland would see it out, but there’s definitely a strange feeling after this one.