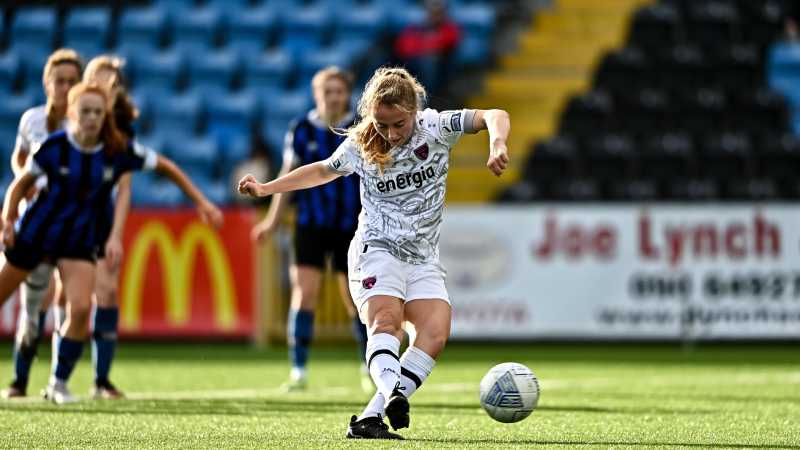 Athlone Town further shook up the top of the WNL table with a 2-1 win over Wexford Youths in Lissywollen this evening.

Wexford took the lead just eight minutes in after a suspicious penalty call from the ref. A corner came in from the left-hand side and Kylie Murphy threw herself in an attempt to make contact with it.

Roisin Molloy at the back stick made the slightest contact with Murphy as she was going down anyway and the ref gave a penalty, much to the crowd, Molloy’s and her teammates bemusement. Aoibhean Clancy, who sent the initial corner in, stepped up and placed it in, despite Niamh Coombes guessing the right way.

Athlone pushed on however and got their reward in the 21st minute. A Molloy cross into the box took a touch and sat up perfectly for Kellie Brennan, who fired in at point blank range to make it 1-1.

The hosts had a few chances before the half but couldn’t convert. Three minutes after the goal Gillian Keenan and Brennan displayed some good link-up play, but Maeve Williams denied them from close in.

Madison Gibson, last week's hero, had two chances at the back post. One was taken onto her right and shanked, whilst the other bounced as she hit it. Both were well off the mark.

Athlone could’ve had a goal less than five minutes after the restart. Molloy received the ball from a throw-in and drilled it into the mixer for Gibson, but Youths converged and put the ball out.

They could’ve had a penalty right before the hour mark when Molloy was clipped in the box. The Sligo native didn’t go down, but appealed nonetheless. Another interesting one for the ref to explain.

In the 82nd minute, Kayleigh Shine sent in a corner from the left. Keenan met it in the box and looped it over Williams. Athlone would withstand Wexford pressure from here on out.

With a Shels win earlier and a Peas win a few minutes after full time, there’s now four teams in a three-point gap. The last few weeks of the season should be very interesting. Wexford are still in pole position, but it feels like a tossup.