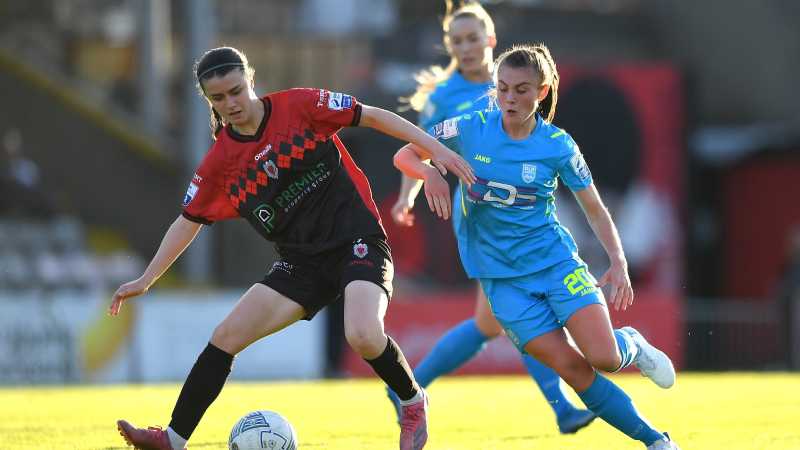 Bohemians snatched the three points with a late 2-1 victory at Dalymount Park thanks to a late penalty from Chloe Darby.

DLR Waves were left to regret dropping the points in what had been an impressive game for the visiting team.

Abbie Brophy's wonderful, well-placed goal just before halftime gave the home team the lead despite being under intense pressure for the majority of the first half.

The game appeared to be headed for a draw until Darby converted a late penalty. DLR had answered in kind with a well-taken goal from Mia Dodd in the first minutes of the second half.

The first-half opportunities belonged to DLR with Mia Dodd's strike forcing a save from Rachel Kelly in the Bohemian goal. Sarah McKevitt also went close but her effort sailed over the bar. The next challenge Kelly had to face in the Bohemians' goal was an attack from Carla McManus, but her shot narrowly missed the target.

Abbie Brophy had an opportunity to open the scoring as he waited for a Chloe Darby pass to meet her but Eve Banada in the Waves goal stopped it at the last second. She would get a second bite of the cherry in the next attack.

Abbie Brophy would collect a great pass from Erica Burke as she hammered it past Bandana to score the game's first goal after Burke stole the ball from Lynn Craven on the edge of the defence in the build-up.

The lead was not to last long as Mia Dodd struck the ball on the half volley inside the box after a defensive clearance failed to clear and dropped to her as her effort found the back of the net. In what was her fifth goal of the season it was the perfect response for Graham Kelly's side.

The game looked as if he was heading for a stalemate but for late drama that resulted in a penalty. Despite consistent phases for attacking play from DLR, it was Bohemians that were to take the late lead.

A cross from Abbie Brophy was met by Erica Burke and the intended target clashed with Bandana in the DLR goal area. The referee pointed to the spot and Chloe Darby slotted the ball past Bandana to seal the tie and Bohemians' first win over DLR in their league history.