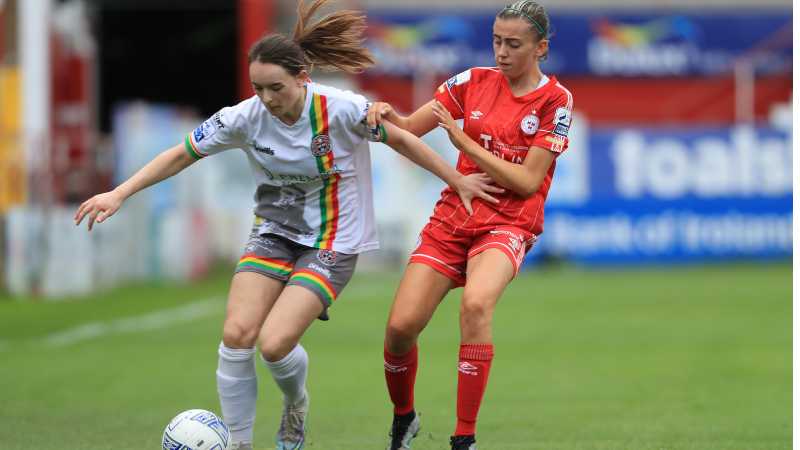 It ended scoreless in Tolka Park in the Dublin Derby between Bohemians and Shelbourne tonight. Both teams struggled to create major chances in a very evenly matched game which ebbed and followed throughout.

Shelbourne started the better of the two sides as their league positions would’ve indicated, but this Shels team despite their dominance have struggled at home as of late so getting on the front foot early was important for the Reds.

It took until the 20th minute for the first major chance of the game. Lisa Murphy of Bohs was booked for a deliberate handball which might have saved a major chance as Noelle Murray was in. Megan Lynch stepped up and rattled the resulting free-kick off the bar.

Coming up on the half-hour mark there was not much to report between the teams, with a couple speculative efforts from distance the only challenges for either keeper.

As Bohemians found their feet and pushed forward, a quick turnover saw Gemma Quinn played in behind by Murray off the break which produced the first real test to Kelly in the Bohs net but she was equal to it.

Burke won the ball back at the edge of the Shels box through some great work but her shot went just over. Momentum boosting from the Bohs captain looking to get her side into the game.

Following Burke’s good work, Bohemians started to create chances. Brophy crossed from the right onto the head of Cooke whose header landed on the roof of the net.

Shels pushed on towards the end of the half but it remained scoreless at the break in an entertaining opening 45 minutes. Shelbourne 0-0 Bohemians.

The second half continued where the first left off, with both sides struggling to create any clear-cut chances and a lot of the play in the middle third.

Despite Bohs playing well the first major action for either keeper in the half was for Kelly in the Bohs net, who saved well from Lynch whose edge of the box volley required her to be sharp.

New singing Emma Starr made her first appearance for the Reds with about 15 minutes to play in the game.

Neither side created much as they both seemed to tire out in the late stages of the game with both having played on Saturday.