Athlone keep pressure on Shels with win in Cork 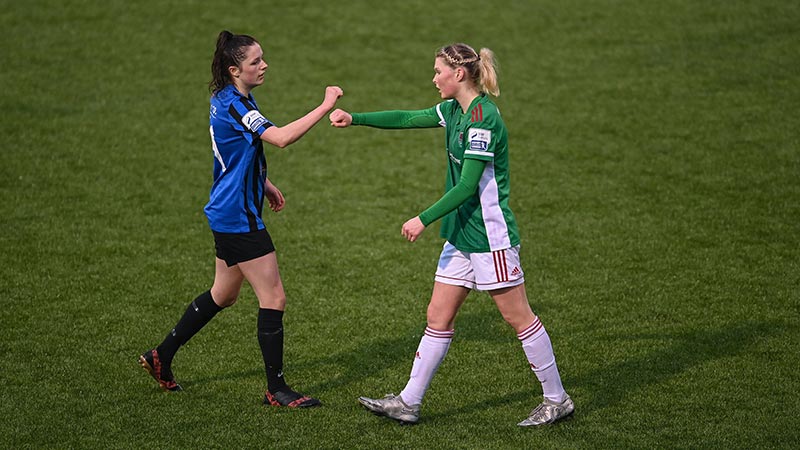 Athlone Town picked up their third win in five weeks over Cork City with a 2-1 win in Turner's Cross this evening.

A Madison Gibson brace proved to be enough. Cristina Dring got one for the hosts, but the difference in finishing decided this one.

Cork threatened from set pieces early on, as in the 4th minute, Laura Shine met a corner and hit the bar. The ball bounced downwards and a goalmouth scramble ensued, but Athlone survived.

Athlone would then take the lead slightly against the run of play. In the 18th minute, Nadine Seward was dispossessed. Cork looked for a foul, but the ref waved play on.

Scarlett Heron played through Madison Gibson who finished into the roof of the net. Like last week, Cork hadn’t made their possession count.

For the rest of the half, Cork would get chances from Laura Shine shooting over and a Danielle Burke flick from a corner. The second half proved more fruitful.

Firstly though, Athlone nearly had a second. A Kelsey Munroe free wasn’t dealt with by Abby McCarthy and the ball found its way to Muireann Devaney whose effort was saved. The rebound fell to Gibson, whose effort was blocked on the line by Seward.

This paid off, as the equaliser came four minutes later. Once again, a corner caused Athlone problems, as Becky Cassin rose highest. Cork hit the bar again but this time the ball fell right to the feet of Cristina Dring for a tap in. Given the pressure, this was a fair reward.

Just after the hour mark however, it looked like the joy would be short-lived. Jessica Hennessy met an Athlone corner and after her header was blocked, her follow up was deemed to have been handballed by Zara Foley.

Emily Corbet stepped up to the spot but her effort was tame and just to her right of McCarthy. McCarthy saved the penalty and it was starting to look like Cork could nick something.

With 15 minutes to go however, a long Coombes kickout resulted in a headed one two between Gibson and Kellie Brennan, who came on for Corbet. The latter played the former through and much like the first goal, Gibson went through and finished into the roof of the net.

Cork would pressure Athone for the last 15, but it proved to be not enough. Athlone maintain their place in third.