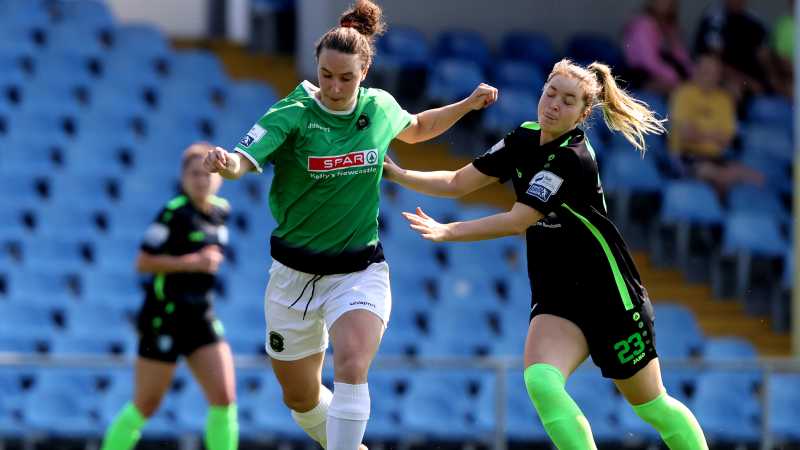 DLR Waves share the spoils with their Dublin neighbours Peamount United, Aine O’Gorman equalised late on to rescue a point for Peamount.

They had their backs to the walls for a lot of the game, but when the chance beckoned to find the net, it was Kate Mooney who made no mistake to score what looked to be the winner in the second half.

Peamount had plenty of chances to find the back of the net, coming within a whisker at numerous stages but Rugile Auskalnyte was heroic in between the posts when called upon, until O’Gorman pounced in the dying embers to score an emphatic equaliser

Such a heavyweight contest, had a relatively timid start as both teams had half chances, Áine O'Gorman had an attempt on goal but Rugile Auskalnyte saved well, at the other end Sarah McKevitt crossed for Katie Malone, whose shot went into the hands Peamount keeper Niamh Reid-Burke.

Stephanie Roche and Erin McLaughlin both had shots on goal midway through the half, but the keeper was not troubled as things remained deadlocked at the bowl, but it was all the way of the visitors as they looked dangerous.

O’Gorman had another chance just after the 20-minute mark, but again Auskalnyte came out to take away the danger, the young netminder doing well in place of the suspended Eve Badana.

Peamount came close to getting on the scoresheet at the end og the half, but again they were thwarted, Lauryn O'Callaghan delivered a great corner and O'Gorman connected with a first-time volley which was well-handled by Auskalnyte, minutes later McLaughlin found Jetta Berrill but her cross was well-blocked by Louise Corrigan, as we were level at the break.

Minutes into the second half Alannah McEvoy was again dangerous with her running style to try create some space, she broke clear and sent in a cross on the left, may have had too much venom as it was just beyond Jetta Berrill at the back post.

After 55 minutes the DLR Waves had their best chance of taking the lead, the chance fell to Kate Mooney who was the target of a Sarah McKevitt corner but her effort went just over the bar, so close for the hosts.

Mooney would find the net however with her second bite of the cherry after the hour mark, a mistake from a goal kick allowed Sophie Watters to play Mooney in behind the Pea’s backline, and she was on hand to finish from a tight angle to give the hosts a 1-0 lead, it was a much better showing from them in the second half.

Auskalnyte needed to be alert minutes after their opener to deny McEvoy an equaliser from closer range, O’Gorman was crucial in the build up, she had skipped past the keeper keeping the ball in play by the byline, before setting up McEvoy for a great effort.

The visitors never looked like giving up and in the 89th minute O’Gorman headed home from close range to give them hope, more than they deserved having some close to finding the net, it was heartbreak for Waves as they felt the three points were secured.