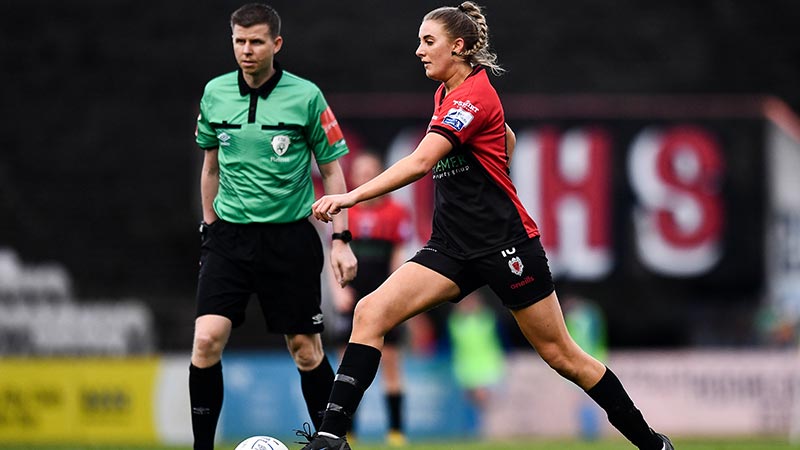 Bohs appeared the stronger for the majority of the game and sustained pressure on the Treaty area resulted in Chloe Darby opening scoring with a fantastic half-volley on 18 minutes.

Treaty held their own for much of the game but could not prevent Rebecca Cooke from doubling Bohemians' lead in the 62nd minute after she received a wonderful through ball from Rachel Doyle.

Aoife Robinson struck from distance in the 93rd minute to make it 3-0 to the locals.

The home side began to apply serious pressure after the 15 minute mark and were soon rewarded for their efforts with a score to take the lead.

A long ball into the Treaty box was chested down by Annmarie Byrne to Chloe Darby, who took it on the bounce and volleyed it into the top-right corner past Michaela Mitchell in the visitor's goal.

Treaty retained their composure after conceding and launched several attacks into the Gypsies' area.

Aislinn Meaney looked to get on the ball in midfield along with Kelsey Wing in what looked like an Treaty side much improved in offensive terms.

Shannen O'Donovan had the visitors' best chance on the half-hour mark, when captain Jesse Mendez displayed some great skill to put the striker through on goal only to be denied by Rachael Kelly in goal.

They couldn't retain control of proceedings though, and Micaela Mitchell was forced to make a good save on 34 minutes to deny Bronagh Kane's effort.

Both sides had forays forward in the remaining minutes of the half but no huge opportunities came and the game became scrappy in midfield so the scoreline remained unchanged at half-time.

The early moments of the second-half were stop-start as Isobel Finnegan went down injured for Bohs on 51 minutes and Amy Madden received treatment ten minutes later.

Debutant Niamh Prior had the game's best chance in between the stoppages but couldn't keep her shot down in front of the Treaty goal.

Bohemians persisted and soon had a second goal when another ex-DLR Waves debutant, Rachel Doyle, played a pinpoint ball to Rebecca Cooke who made it 2-0.

Treaty did enjoy a strong period after conceding, with Aislinn Meaney in particular threatening the opposition goal, but the visitors could not score and the game became scrappy as Bohs looked to shore things up.

The Gypsies landed a final blow in the 94th minute when replacement Aoife Robinson hit the ball into the goal from distance for the goal of the game.