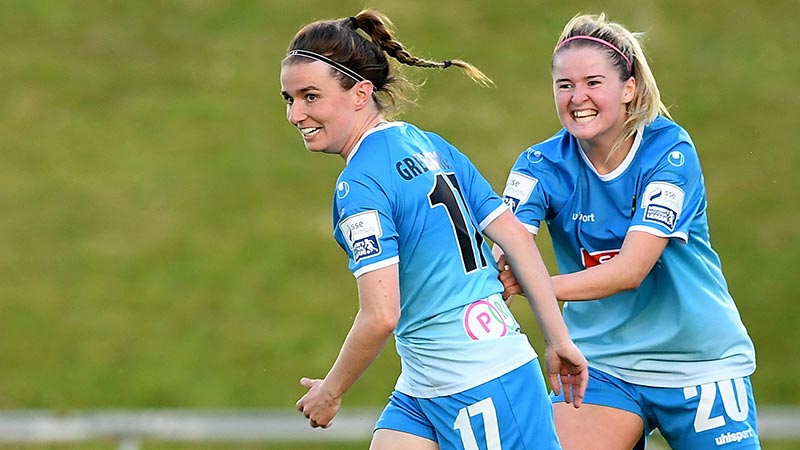 A 94th minute Dearbhaile Beirne header saw Peamount earn a late 1-1 draw away to DLR Waves at Belfield this evening.

In an entertaining encounter, Peamount looked the better for much of the game but struggled to beat Eve Badana in the Waves' goal, who saved Stephanie Roche's first-half penalty.

DLR opened scoring in the 50th minute through a Katie Malone header and it looked as if the home side would hold on to earn all three points.

Beirne's header in the final moments of the game saw Peamount take a hard-earned point away from the fixture.

The visitors imposed themselves on the game early on, creating some decent chances.

Sadbh Doyle and Aine O'Gorman had good opportunities to open scoring for the visitors but were denied by solid goalkeeping from DLR's Eve Badana.

The momentum shifted around the 15 minute mark, with the Waves' Sarah McKevitt caused trouble in the Peas' area with her crosses.

Kate Mooney had the home side's best chance in that period when she got on the end of a McKevitt cross but hit the ball straight at the opposition 'keeper Niamh Reid-Burke.

United would finish the half the stronger though, and it was only great goalkeeping from Eve Badana that kept the score level.

A penalty was awarded to the Peas when Aine O'Gorman was brought down by Louise Corrigan in the DLR box, but Badana anticipated the direction of Stephanie Roche's attempt and made an excellent save.

A dipping effort from Lauryn O'Callaghan and a Stephanie Roche header followed but Badana again denied the visitors and the score remained level at the break.

DLR began the second-half the more aggressive and found themselves ahead in very little time.
Katie Malone got on the end of a pinpoint McKevitt cross and was able to nod in from the far-post to send her side ahead in the 50th minute.

Upon conceding, Peamount stepped it up a gear but could not find goal as Badana and her defenders put their bodies on the line to prevent a concession.

The home side relied on the counter and began to win ball up the field in the closing stages and it looked as if Peamount's chances were over.

With four minutes added on at full-time, the visitors pushed and pushed and were rewarded for their efforts in the last play of the game. Substitute Beirne got on the end of a ball into the area and headed over Badana, finally beating the 'keeper, and earning a point for Peamount.