Athlone get back to winning ways 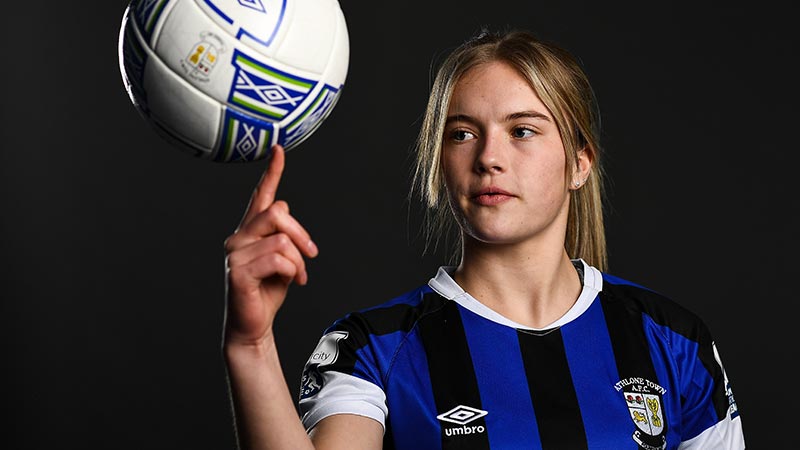 Athlone Town got back to winning ways following a 2-1 win over Bohemians in Lissywollen today. It took a while for the deadlock to be broken, but goals in quick succession from Emily Corbet and Roisin Molloy after the 70th minute saw the town to all three points. An Erica Burke penalty with two to go did little to change the outcome

This got off to a hectic start. Just two minutes in, Athlone won a penalty. A poor touch from Annemarie Byrne was seized upon by Roisin Molloy, who drove at goal. Her effort was parried but only as far as Kellie Brennan, who was fouled.

Emily Corbet, who’s been reliable from the spot this season, stepped up. Surprisingly though she blazed over, keeping it 0-0.

Around the 15 minute mark, Bohs started to threaten. Lisa Murphy hit a free straight at Coombes, Rebecca Cooke struck over following a nice one-two and then Bronagh Kane hit the woodwork.

This came from Kane latching onto a loose ball just outside the box and trying to catch Coombes at her near post, but only finding said post.

In the 37th minute, Kane found herself without luck again. She tested Coombes from range and Coombes tipped onto the bar. Again close, but no cigar.

In the second half Rebecca Cooke threatened Athlone. Firstly, she latched onto a poor touch from Kayleigh Shine and went through, but sent it over.

About ten minutes later, she went through again and Kelsey Munroe ushered her off the ball. She went down and Bohs appealed for a penalty, but the ref waved claims away.

It took two minutes for Athlone to win it. Following Brennan hitting the bar, Athlone had a corner. It was swung to the back post and headed across, where Corbet met it to make up for the early penalty miss.

From the kickoff, they went down the left wing. The ball was played across the area and Roisin Molloy met it, finding the net thanks to a deflection off Ciara Maher. In the blink of an eye, it seemed over.

Bohs made it nervy near the end however. Chloe Darby was pushed in the box from a cross and the ref pointed to the spot. Erica Burke stepped up and although her initial penalty was saved, she hit the rebound into an empty net.

Bohs pressed near the end but to no avail. Athlone will take the points and move.