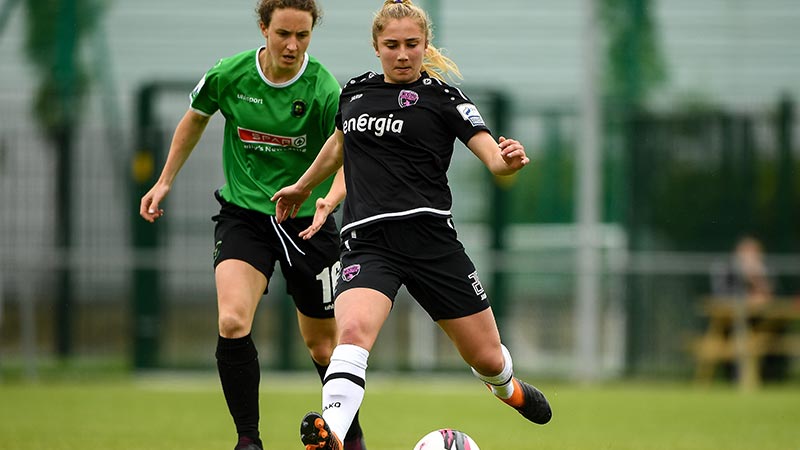 Wexford Youths played out a six goal thriller with Peamount United as both sides took a point from a rip-roaring 3-3 encounter.

Erin McLaughlin and in-form Ellen Molloy exchanged quick-fire goals before Molloy scored her second on the half hour.

Sadhbh Doyle’s smart finish levelled it only for Kylie Murphy’s precise curler to put Wexford ahead at half time. Yet Aine O’Gorman’s accurate curler ensured Peamount took a share of the spoils.

Coming into this one, Peamount hadn’t scored in their last two games dropping to third place behind a buoyant Youths side who beat Cork 2-1 last week.

Yet the Peas scored first after Doyle’s surging run from midfield drew a save from home goalkeeper Maeve Williams which only went as far as to McLaughlin’s feet and she tapped in. Less than a minute later, an astray defensive header was punished by Molloy who danced into the box and finished ruthlessly.

The Ireland international put the hosts ahead with a smart low finish after Murphy played her through. But just six minutes later, Peamount bounced back. Attacking momentum was maintained from a corner and Stephanie Roache’s chipped ball in was well anticipated by the diminutive Boyle, the ball nestling in the net.

It was goals galore and Murphy stroked Wexford ahead once more after she was well set up by Becky Watkins.

However, immediately after half time, James O’Callaghan’s troops levelled once more. Doyle, with another purposeful forward thrust from midfield fed Jetta Berrill on the right and her cutback was rifled home accurately by Aine O’Gorman.

The second half continued at a lightning fast pace with the visitors looking more likely to nick a winner, Tara O’Hanlan’s surges and set pieces from left back posing a real danger.

Midway through, Williams made a superb sprawling save to deny McLaughlin as Edel Kennedy made her comeback from injury for the Youths on 76 minutes.

Peamount racked up three bookings and had Roache red carded for losing her cool with five minutes left. Despite this, this helter-skelter fixture ended level.

A fine advert for the WNL and women’s football as a whole. But the biggest benefactors were undoubtedly Shelbourne who now lead the league by seven points at the top.